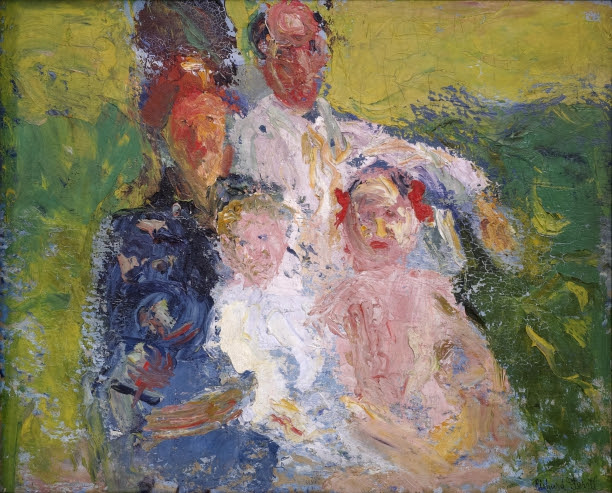 Arnold Schoenberg's Gurrelieder
is conceived as cosmic panorama. King Waldemar curses God and is himself cursed, doomed to ride the skies forever, inspiring awe and horror. This is an audacious work of theatre for orchestra and voices. No costumes needed, nor staging, though seeing it in a performance space as inherently dramatic as the Royal Albert Hall intensifies its impact. No live Gurrelieder will ever be dull.

Gurrelieder has featured in seven BBC Proms. Pierre Boulez conducted it in 1973, in an astounding performance that is still one of the best recordings available. Andrew Davis opened the 1994 Proms with a Gurrelieder where Hans Hotter gave an outstanding performance as speaker, so remarkable that it's lived in my memory ever since. Jukka-Pekka Saraste and his musicians have a lot to live up to, but their 2012 Proms Gurrelieder did not disappont. Every performance has its merits, and from each we learn.

Wagner's influence was so pervasive that Schoenberg, like Mahler and Hugo Wolf before him, needed to find forms other than opera through which to develop his musical persona.  Saraste emphasizes the "Wagnerisms" in Gurrelieder so forcefully that you keep hearing echoes from Tristan und Isolde in the interaction between Waldemar and Tove. here's even an echo of the Shepherd's  tune in the woodwind passages. King Waldemar's men sound like Gunther's Gibichungs, and the Waldtraube plays as pivotal a role as the Waldvogel. It's relevant that Simon O'Neill, who sang Waldemar, specializes in lower-range Wagnerian roles like Siegmund.  Angela Denoke was a reasonable Tove, and Katarina Karnéus sang a beautifully rounded Wood Dove.

Saraste's emphasis so dominates that the differences betwen Parts 1 and 3 in Gurrelieder are minimized, particularly as Part 1 was conducted more loosely than Part 3. It's a valid approach, and certainly makes the piece approachable. Yet it's not an interpretation that brings out the Schoenberg in Gurrelieder, which is far more original and challenging.

Between the time Schoenberg began Gurrelieder and the time he completed it, he went through trauma in his personal life. The picture above shows Schoenberg and his wife Mathilde Zemlinsky, with their two children. It's a summer afternoon, they're in the Austrian countryside. But the faces are pools of blood. Mathilde and the artist Richard Gerstl had an affair but when it ended, Gerstl killed himself. The following year, Schoenberg (himself a painter) wrote Das Buch der Hängenden Gärten and Ewartung (op 17, 1909). He was now able to resolve the impasse with Gurrelieder.

In Part 2 of Gurrelieder, Waldemar responds to the loss of Tove with "Herrgott, Herrgott, wiesst du was du tatest" . The notes that are later sung as "Herrgott" appear right at the beginning of the whole piece, but are now tranformed. Simon O'Neill doesn't have the most lyrically beautiful voice, but it's right for Waldemar, consumed as he is with cosmic rage. O'Neill uses the idiosyncrasies of his voice intelligently. This Waldemar is maddened by suffering and turns on God. "Lasst mich, Herr, die Kappe deines Hofnarr'n tragen!", he snaps. (Let me wear your jester's cap). As Klaus Narr tells us, Waldemar isn't a nice man, which is perhaps why he's so overwhelmed when Tove loves him. O'Neill seems to have understood the part in context of the whole work, rather than just singing his own part regardless as some of the smaller parts are often done. This I respect more than a "lovely" voice,  Roman Trekel had an even more metallic burr, but sang parts that worked for him. Philip Langridge  (a good Klaus Narr) had an even more awkward voice, but used it to create character better than most.

As the ghost of Waldemar rides through the skies, the terrified Peasant (Neal Davies) hides and puts his faith in formulaic prayers. So it's significant that Schoenberg makes so much of  Klaus Narr. He's a jester and plays the fool, but it's his job ito say things to kings (and Gods) that they don't want to hear. Like Waldemar and his hunters, the jester is dead, too, a haunted spirit forced to walk in endless circles, going nowhere. It's not a good thing and he knows it. His music is unsettling, as it should be, despite the mock bucolic text. The joke is on the jester, who must ride with his master in death. Jeffrey Lloyd-Roberts sang correctly but could have expressed more savage irony. From this point, a change is coming, overturning the "Wagnerian" forces that prevailed before. In the orchestra, Saraste lets small instruments like piccolo and xylophone be heard over the big brass and overwhelming strings.

Superlative choruses sang the demonic huntsmen, extremely well-parted so their song moved with the wildness you'd expect from ghosts riding on the wind. As they fade into  "Versinkt! Versinkt", an eerie chill seems to sink in, even in the overheated Royal Albert Hall.

The "Wild Hunt of the Summer Wind" sweeps away all that's gone before. But Waldemar's curse is not resolved. Instead, Schoenberg uses his music and Sprechstimme to herald something completely new. Haunted as I am by Hans Hotter's Speaker I probably expect miracles. This is a part for baritones who retain their musical instincts even when their voices bloom no more, which adds to the meaning of this strange part. As dawn breaks, the ghosts fade, and nature, in its glory, awakes. Wolfgang Schöne still has a voice, and intones the tricky rhythms nicely. But we're definitely not in Wagner territory now. The Speaker addresses "Herr Gänsefuß, Frau Gänsekraut" (Lord Goosefoot, Lady Amaranth), a reference to the "Herrgott" heard earlier. It's also a reference to Waldemar and Tove and their status in the scheme of worldly things. But Goosefoot and Amaranth are tall weeds cut down by wind. This Wind blows the past away, to welcome new growth.

"Seht die Sonne!" the chorus sang with tumultous vigor, the orchestra resurgent in glorious splendour. "Läßt von lichter Stirne fliegen Strahlenlockenpracht" (and from the sun's glowing brow flies "the spendour of his locks oif light" as the translation by Donna Hewitt puts that last, lovely and very Germanic noun).

I tend to listen to later rather than earier Schoenberg. I ought to gird up my loins and have a go at the more Romantic stuff. Have you seen this video about his lighter side?
http://youtu.be/AAbo1uOuxG8