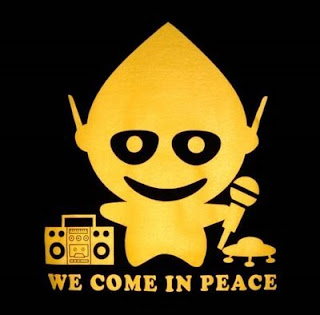 Stockhausen's Mittwoch aus Licht live from Birmingham Opera Company broadcast in full.  With Stockhausen, listening is not enough. Stockhausen is a "Happening" as they used to say in the 60's. Listening is not enough, you need to experience the whole mentality to get the full impact. Being there, with other people, sharing the dream, is part of where it's at. Participation Art.

On the other hand,  watching online has advantages. You can wander off and get a stiff drink, which makes you more receptive. You wouldn't dare do that in Wagner, who demands such concentration that you feel drained and high at the same time. Yet you can't miss too much of Mittwoch either, because details count. There's method in this madness. The pulsating gradations act like hypnosis, worming their way into your mind. Everyone knows about the Helicopters, but we're prepared for them by seeing other players suspended from the ceiling as they play. They're strapped in, but the cellist's hair falls over her face - how does she see? She must be terrified, playing on auto pilot. The trombone threatens to tip the trombonist over. In comparison, the string players in the helicopters are having an easy ride, and that's part of the "meaning". As someone in the audience asked, "Are the pilots performing, too?" Perceptive comment. Who's controlling whom?  Technology or humans or some extra terrestial force we don't even recognize? Which is, incidentally the story of Michael the archangel and his cosmic spiritual saga. Throughout Mittwoch, the idea of ascent and descent, ladders, pulleys, helicopters, patterns that replicate in the sounds we hear, and in Graham Vick's thoughtful visual images. Danger, insecurity, dottiness.

Once you get into Stockhausen's  mindscape, things fall into place whether they make sense or not. Like an intense dreeam in a parallel universe, where you're learning the new vocabulary of an ancient, alien culture.You begin to recognize the patterns in those hypnotic pulses. No wonder Stockhausen fans are mesmerized by the complexities. A man "sings" into a boombox (cutting edge in Stockhausen's day, prehistoric artifact now). A voice intones "coloratura" against technologically-induced white noise. A soprano sings disjointed "coloratura". It's utterly irrelevant to approach Stoockhausen in conventional music terms. Everyone is a performer. Originally the Arditti Quartet played the Helicopter bit, virtuosi playing in the antithesis of what a string quartet should be. Here, it was the Elysian Quartet interacting with rotorblades. Machine-generated electronics, mixed by men. Musicians mixed with non-musicians. Mittwoch is the highest form of communiuty opera around, a lot more sophisticated conceptualy than the gags the Helicopters provoke.

Audience participation too, though not as one might think in the Q&A session around the famed quartet. Stockhausen builds that into Mittwoch, to make us think. Why the Birminghgham Opera Company chose the inane DJ, I have no idea. Perhaps it's a joke, though a very childish one, because almost anyone in the audience could have done the job better. Nihal was just plain embarrassing, resorting to insulting his audience in the way an incompetent stand-up comic deflects attention away from his own failings. This audience wa far too polite to boo the bumbler. When someone said the music was bollocks, the audience cheered because it was a real, genuine response, not the hyped up hysteria the fake DJ was pretending to show.  This was an audience who know their Stockhausen well, who see through hyperventilating presenters. The joke, ultimately, was on the joker, showing up the crass stupidity Stockhausen eschewed.

Lots more on this site on Stockhausen. Venture forth.

Nihal was moronic, wasn't he? Seemed to be aggressively out of his depth.