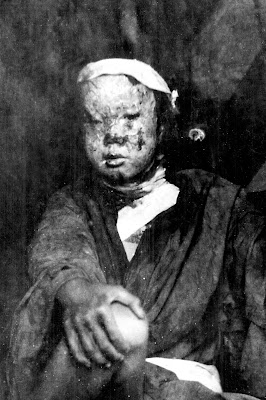 Today, 9th August, is the anniversary of the bombing of Nagasaki, three days after Hiroshima. The irony is that Nagasaki was the most westernized, cosmopolitan city in Japan. Madama Butterfly wasn't set there for nothing. Read more about the irony of Nagasaki here, and lots more on Hiroshima, non violence annd even Puccini on this site. And watch the movies I've written about, like The Human Condition (Kobayashi) Black Rain and The Burmese Harp.

For today, a full download of a unique "home movie" made with the ordinary people of Hiroshima, released after the American military occupation of Japan ended in 1952. The film, directed by Kaneto Shindo is based on a novel by Arata Osada.  A young woman called Takako has been living on an idyllic island for five years but finally returns to Hiroshima where she grew up. She meets a beggar, blinded and scarred by radiation burns. He's Iwakichi, a servant of her family. "Go away!" cries Iwakichi, who can't bear for her to see him in this way. But Takako bows to him, a gesture of respect. It helps  to understand non western society to really appreciate this reversal.

Iwakichi's grandson Taro lives in an orphanage. Thousands of bereaved children: a city of survivors haunted by those who are no longer there. Takako wants to adopt Taro but Iwakichi can't bear to lose the last vestige of his former life. Takako, who was a teacher, tracks down her former students. One girl lies dying in a hospital, comforted by thoughts of heaven.  To die so young, but with such dignity.  Eventually Iwakichi sends Taro to Takako and kills himself. The film is badly shot and the subtitles hard to read, but it's such a quiet, moving story that it's worth watching.