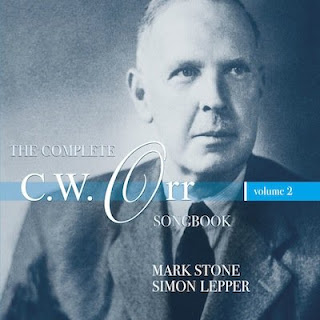 C W Orr isn't unknown. More than ten years ago, Hyperion issued a 2 CD set of songs based on A E Housman's poems from A Shropshire Lad  with settings by Butterworth, Moeran, John Ireland and five by C W Orr. The late Anthony Rolfe Johnson sang and Alan Bates recited. Mark Stone has put a lot of research into this new complete Orr series, uncovering songs and biographical details about the composer, not readily available. Stone Records Complete C W Orr Songbook vols 1 and 2 fill a significant gap in the discography of British music.

Stone Records has made a major contribution to the music of Frederick Delius, recording Delius's complete songs and his music for piano and small ensemble. Hence the C W Orr set, for Orr owed his career to Delius. Orr himself was something of an anomaly. The posthumous son of an officer in the late Victorian  Raj, he seems to have had a very sheltered life in Gloucestershire.  Much has been made oif his fondness for German Lieder, which was hardly unusual at the time, even in England. But the influence is frankly hard to detect in his music, which owes as much to late Victorian song and to British composers a generation older than Orr himself.  Delius learned from Grieg and the European mainstream of his own time.  Orr, on the other hand, seems to have immersed himself in a form of Englishness that Delius eschewed. Delius lived in France. Orr, uncommonly attached to his mother and later responsible for her female companion, spent most of his life in the Cotswolds, mainly in Painswick. His only other musical influence seems to have been Peter Warlock (Philip Heseltine), who died in 1930. This  biographical background is important because it sets Orr's music into context.

Some of the songs on this second volume of Orr's songs date from as late as 1959, but stylistically they could have been written more than fifty years earlier. Don't even venture Benjamin Britten, Gerald Finzi or Ralph Vaughan Williams. Perhaps this explains Orr's identification with A E Housman, a favourite of composers before the First World War. One of the better songs in this volume is Housman's 1887 where the poet writes of soldiers dying in the service of Empire in far-flung colonies. The fate of Orr's father is pertinent. Housman contrasted Queen Victoria's 50th Jubilee with the loss of healthy young men. Orr however sets the poem in a straightforwardly heroic style, missing Hiusman's darker subtext altogether. He quite likely wasn't even aware of the homoerotic undercurrents in Housman's work, which gives it such distinctive emotional character. The song dates from 1937. It's almost cheerfully lilting and insouciant, with a jolly final flourish. One wonders what George Butterworth would have made of this poem. Read about Mark Stone's excellent George Butterworth Songbook.

Even had Orr, who died  as recently as 1976, belonged to his parents' generation, one wonders if he'd have made an impact in comparison with masters like Vaughan Williams and  Butterworth. Their settings of Housman poems are masterpieces. Orr's style depends on heavy, workmanlike word painting rather tham musical inspiration. The phrasing is often stilted, forcing a naturally mellifluous voice like Mark Stone's into awkward corners and sudden contortions. Simon Lepper is fortunate because the piano parts are written in a prosaic, even unsubtle way that makes no great demands.  Nontheless Stone Records has made a major contribution to British music by recording Orr's work. Stone's trademark is meticulously well prepared professionalism, giving all the composers they record as high quality as possible presentation.  The Stone Records Havergal Brian Songbook is wonderful beecause it makes a very strong case for Brian's quirky individuality. It's a genuinely lovable recording. (read more here).

Orr is far less original than Havergal Brian, so don't expect the same delights. But Stone Records makes the best possible case for him, and that is a service to British music.
at August 28, 2012

Please come to a recital at the Oxford Lieder Festival on the 20th October, featuring Stuart Jackson, Will Vann and me, Johnny Herford. All settings of AE Housmann, including Butterworth's Shropshire Lad, Lennox Berkeley's Housmann settings, plus songs by Gurney, Rebecca Clarke, Bax and CW Orr. It's a lovely programme, and a mention on your blog would be very gratefully received!

Definitely ! I've supported Oxford Lieder for 11 years now and do a lot on English song. And Stuart Jackson is fantastic extremely good in this rep. Please search this site, and read more