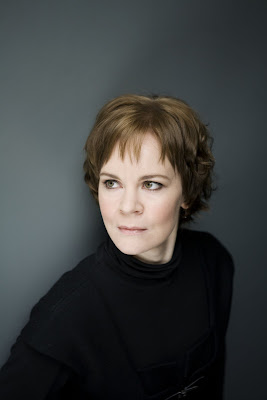 Susanna Mälkki and the Philharmonia together at the BBC Proms.  A match mde in heaven. The Philharmonia is - I'll stick my neck out - the finest orchestra in London, players of great skill, eager to stretch themselves as artists. Remember their Schoenberg Gurrelieder with Esa-Pekka Salonen at the South Bank some years ago?  Much more idiomatic than Saraste  and the BBC SO at the Proms this week. Susanna Mälkki challenges them and they respond. She is Music Director of Ensemble Intercontemporain and has conducted many of the major orchestras in Europe. At BBC Prom 42, Mälkki and the Philharmonia showed what they can achieve together.

This programme was extremely well chosen on many levels. Prokofiev Romeo and Juliet Suite no 1 set the tone. The programme would end with Bartók's Concerto for Orchestra which incorporates elements of dance and makes a wry dig at Shostakovich. Between them, Olga Neuwirth's Remnants of Songs - an Amphigory (a message that purports to convey no meaning)  All three pieces  incorporate references to other works and genres, enhanced when heard togther. Very subtle, but very brainy. Mälkki's Prokofiev is elegant and precise, as dance should be. No need for slushy fake Romaticism. In dance, poise is of the essence. You don't "approximate". Mälkki made Prokofiev move with grace.


Olga Neuwirth's music is purposeful, and with Remnants of Songs - an Amphigory she shows how delicately she can write. Some objected to her Lost Highway when it came to the ENO Young Vic in 2008 because it didn't resemble the David Lynch movie that inspired it. But that was precisely her point: she was writing music, not illustrating film (review here).  Remnants of Songs evolves from fragments of song. Conceptually it's strong: we process what we hear until it sinks into our subconscious, emerges in snatches, often disassembled. The soloist, Lawrence Power, giving the UK premiere, plays delicate wisps that dissolve as soon as you begin to pin them down. Sometimes almost bare chords against silence, then circular figures that turn upon themselves. I thought of a squirrel scurrying about, storing things away for future retreival. Powers bows angular shapes, and the orchestra concludes the second "song" with a splendid, golden semi-fanfare. Power changes tack, plucking  rather than bowing, and the song spirals up and down the scale, gaining in momentum, til it suddenly ceases. Smooth transits. The orchestra responds with loud, dramatic chords, evoking the film noir. The viola dances exuberantly, and the piece ends with a mood of cheeky brightness. Are we hearing faint traces of Schubert in the ending, as we heard in the beginning? It hardly matters, for Neuwirth is blending whimsy with inventive energy.

The ethereal high theme that begins Bartók's Concerto for Orchestra develops subtly until it emeges with expansive confidence. Mälkki observes detail carefully, so the music seems to oscillate with light and clarity. This highlights the more disturbing undercurrents in the work. Bartók's music keeps churning and changing, tempi spirited along as if propelled by winds of change. As with Mälkki's Prokofiev and Neuwirth, you hear the spirit of dance. Particularly vibrant flutes and piccolo. Then the tam tams reintroduce memories of Magyar traditions. Bartók knew full well what was happening in his native Hungary in 1943. The eerie "night music"gives way to trumpet calls. Firm staccato, disconcerting tempi changes. Yet, Mälkki and the Philharmonia make this concerto feel affirmative. Bartók isn't going to give in to despair.