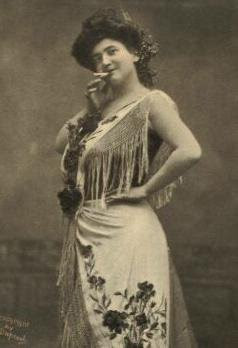 My friend and regular reader has written about the first ever recording of Bizet's Carmen Habanera. It was made in 1891 by Julius Block , a businessman who bought a phonograph off Thomas Edison. This was way before the concept of commercial recording developed.  But fashionable, well-heeled people were fascinated by the novelty. When Block demonstrated the phonograph to the Tsar, the Tsar bought one too. Block persuaded the big stars of the day to play and sing for him. Block's wax cylinders were long thought missing but Ward Marston has cleaned them up and made them available on CD. (read more here)

The first Habanera recording was made with Italian mezzo Adele Borghi (b 1860). The recording lasts 1.33 so isn't complete, but the wonder is that it exists at all. Carmen was "new music" at the time, probably quite racy stuff. Borghi's recording was made only 16 years after the premiere. It's interesting that 19th century people didn't have hang-ups about "traditional" or "conservative" music. Once Carmen caught on, it became a classic. What's more people of the time were sufficiently technology-friendly to experiment with the latest inventions.

The photo shows Emma Calvé as Carmen with her arms uncovered, smoking a cigarette and looking provocative. Calvé also recorded the Habanera, in 1902. In 1905, Jeanne Marie de L'Isle made another recording. Her aunt and teacher was Célestine Galli-Marié, Bizet's first Carmen. Listen HERE for Calvé and HERE for de L'Isle.
at August 09, 2012