Blockbuster Prom 43, sure to be seared into the memory of all who were there. Queues round the block, punters turned away in droves. Tchaikovsky's 1812 Overture s such a showpiece that it usually gets played at open-air events, complete with fireworks. the presence  of "Sexy Ed", the charismatic Edward Gardner, and the prospect of big band massed choirs and big orchestras - no wonder the Royal Albert Hall was packed to capacity.

Musical considerations give way to sheer spectacle when it comes to the 1812. Fortunately the ghost of Sir Henry Wood and his high standards still pervades over the Proms. Hence we heard the original version with massed choirs. The BBC SO Chorus and the Crouch End Chorus balanced volume with finesse, not something easily achieved by party-piece outdoor performances. They were wonderfully hushed and reverential, creating a  suitably "Russian" atmosphere, against which the brass, percussion and cannonades seem all the more shocking.  Only at the Royal Albert Hall can  this combination of circus and music be carried off quite so well.

Rachmaninov's The Bells needs similar extravagance. Edgar Allen Poe’s original poems were substantially changed in the Russian translation of The Bells but that doesn’t matter. Rachmaninov got enough from the translation to create a new, original work that would be one of his favourites. Artists need creative licence: in The Bells, Rachmaninov creates a distinctive landscape, each scena regulated by different kinds of bell sounds. Perhaps the Russia he remembered was like that, where the rhythm of life  was accompanied by the bells of the Church, by folk festivities and so on.  Silvery sleigh bells give way to wedding bells,.Winter turns to Spring. Stuart Skelton (another good reason for catching this Prom) sang the tenor part, and Albina Shagimuratova the part of a happy bride, or perhaps, by extension, a future Mother Russia with dreams of fertility and renewal. But then something goes horribly wrong . In the presto third movement, the bells sound alarm, Do we hear flames and destruction in that dangerously wild orchestration? The choral parts were sung with discipline: even in crisis, the peasants stick together. Stillness, muffled drumbeats. then Mikhail Petrenko's powerful voice intoned, the choruses following as if in procession in his wake. Click on photo below to enlarge. It's Ilya Repin's Religious Procession at Kursk, later the scene of the biggest tank battle in world history. 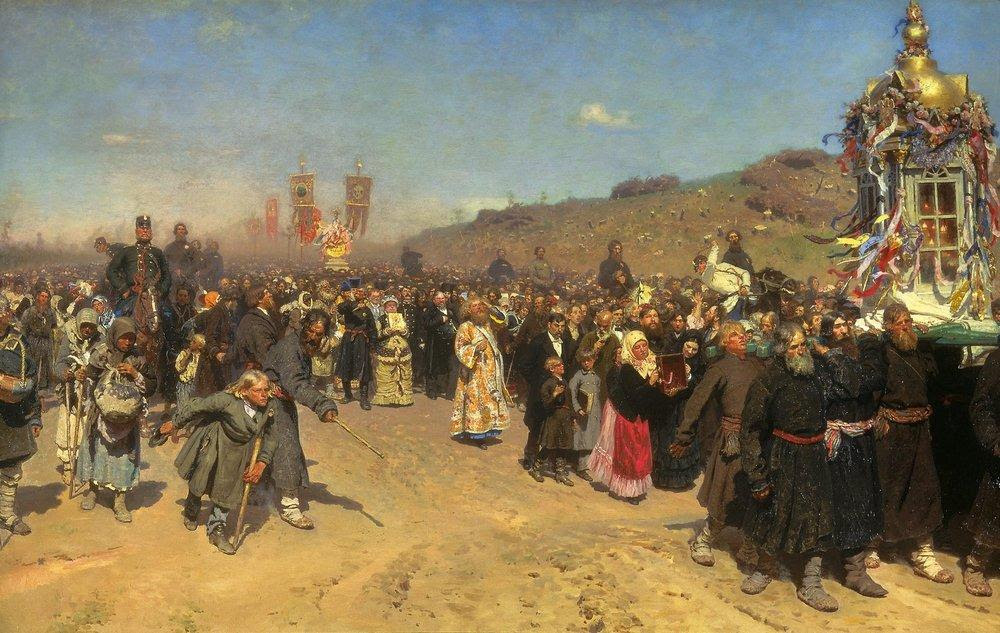 Sad woodwinds created pathos, and the sense of real wind blowing away what had gone before . Much will always be made of the techniques with which Rachmaninov creates sounds that sound like bells but are illusion. Upright piano played percussively, perhaps a very private joke coming from a virtuoso soloist turned composer. In this centenary year, our perceptions are coloured by what we know happened to Rachmaninov's Russia after he wrote the piece in 1913. Perhaps that's why, in later years, Rachmaninov would look back on The Bells as a favourite, a sort of musical icon preserving a world irrevocably changed.

Although this Prom was billed as "Russian", Gardner's style isn't  "authentically" Russian.  (I'm thinking of Svetlanov's  recording of The Bells)  National identity doesn't define art. Baiba Skride played the violin inStravinsky's Scherzo fantastique and his Concerto for Violin in D with such feeling and elegance that it didn't really matter whether Stravinsky was Russian or French or a dispossessed Russian living in America. His music is universal, stylish, whimsical and fiendishly difficult at turns.

Thank you Ros, I depend on good folks like you

and Baiba Skride didn't play the Scherzo: it's an orchestral piece

OK, baiba was the soloist, if that makes you happy

Come on, that last one is not worthy. Why not get it right in the first place? There's no soloist in the Scherzo Fantastique.

(And the 1812's "original version with massed choirs"... Have you been listening to too much Katie Derham?)

On another point, I'm curious as to which Svetlanov version of The Bells you meant - there are two.

Nit picking is the art form of tiny minds