Andris Nelsons conducted Benjamin Britten's War Requiem at Prom 47. Nelsons' War Requiem with the City of Birmingham Symphony Orchestra in Birmingham is legendary, but the Royal Albert Hall is a unique setting. It illuminates even relatively straightforward performances, like Bychkov's on 11/11/13 more here)  But whatever the reason, Nelsons' Prom Britten War Requiem was exceptional. You can never say "the finest ever" but this came close. Wh ? I think because Nelsons brought out its fundamental musicality. The War Requiem carries emotive baggage, which is perfectly valid, but Nelsons emphasizes its musical depth, making its impact even more powerful.

"Kleenex at the ready… one goes from the critics to the music, knowing that if one should dare to disagree with ‘practically everyone’, one will be made to feel as if one had failed to stand up for ‘God Save the Queen' " said Igor Stravinsky. He had a point, for the image we get of the 1914-18 war is distorted by media emphasis on the Western Front. Stravinsky knew that what happened on the Eastern Front was arguably far more catastrophic. Famine, ethnic cleansing, the rise of Bolshevism and the collapse of the Old Order.  "Which war, whose requiem?" as Ian Bostridge wrote in A Part of History: Aspects of the British Experience of the First World War (Continuum, 2008) . Can a piece commissioned to commemorate Coventry tell us about Dresden, Stalingrad, Nanjing, Hiroshima and the Holocaust?  Nelsons' magisterial account connected the War Requiem to the ages, and made it timeless. Exceptionally good choral singing (concert master Simon Halsey) and playing made this a Prom to remember.

The long chords of the organ thundered into endless resonance, searching infinity. Shimmering brass, and the bright, younger voices of the BBC Proms Youth Choir: a Requiem Aeternam that truly felt eternal.  "What passing-bells for these who die as cattle? " comes as a shock. The brutality of Wilfred Owen's imagery emphasized by the quiet menace of the tolling bells in the orchestra.  Trumpets led forward, dazzling in their brightness, percussion at once beautiful and brutal, in telling contrast. For whatever reason, mankind is seduced by war.  Hence, perhaps, the contrast between "bugle" and solo flute, and the first appearance of the soprano.. The elegance Nelsons draws from his players and singers is far more unsettling than straightforward dissonance.The swirling counter-rhythms in the chorus  further shake us from our bearings. Nelsons defined the critical descent into silence from which the soprano (Susan Gritton) rose. Lovely back and forward rhythms, yet chilling, for they suggest the swaying of a body being carried on a stretcher. "Move him into the sun " thus felt surprisingly physical, even earthy, for Owen's poem refers to clay and the fields unknown soldier might have tilled. The poem, however, is titled "Futility" for the sun's rays cannot revive the dead.

What "offering" is this Offertorium?  jaunty rhythms like a mad folk tune from the ancient past. This sets the context for the "Abraham and Isaac" passage, where Toby Spence and  Hanno Müller-Brachmann sang together, victim and killer bound in an unclean pact.  We're in the trenches but the weight of  Biblical forces bears down. "Half the seed of Europe, one by one" is destroyed. Nelsons marks the silences between each repeat, so the portent sank in fully .

The Sanctus refers to the sacrament of consecration. Bell sounds rang out, as in the most holy moment in the Mass. Susan Gritton's voice shone on the word "Sanctus", but also picked up on the "medieval" decoration Britten wrote into the part, not always observed so cleanly. From cataclysmic tumult to all-illuminating transfiguration. All the forces Nelsons had at his command united in a glorious pinnacle of overpowering brightness. Truly, "after the blast of lightning from the east, the flourish of loud clouds, the Chariot throne". 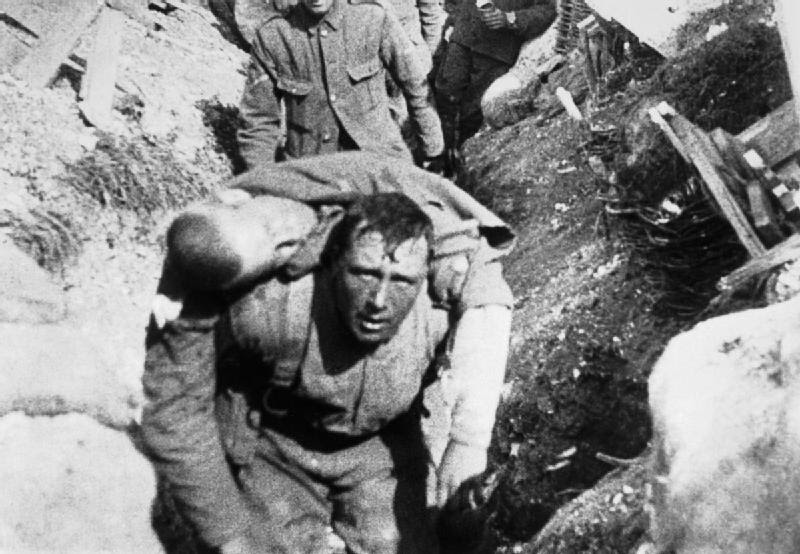 In the Agnus Dei, Britten quotes Owen's "At a Calvary near Ancre" which mentions a wayside calvary with the image of a crucifix and priests whose proud faces are "flesh-marked by the Beast". How few conventional performances recognize the irony!  Britten's sympathies are not with the Church. This Libera Me was driven by powerful forces indeed. Gritton's voice marked the choppy, deliberately breathless excitement which culminated in a glorious  crescendo.  Insistent tappings in the orchestra, machine-gun staccato deployed with purpose, mixing death and transition. A transformative Liberation indeed. We've passed through Owen's "profound dark tunnel"  (a reverse of birth) into a new , strange plane of existence where earthly enmities have no meaning. Listen to the quiet drone behind Spence's voice on the rebroadcast,  it's very atmospheric. The baritone's final words need no accompaniment. Müller-Brachmann intoned the words "I am the enemy you killed" so it felt personal. At the culmination of his War Requiem, Britten brings back the youthful chorus, the blending of orchestra, organ, massed voices and soloists suggesting a glorious rebirth, a bright new tapestry looking forwards. This time, when we hear the bells and the words "Requiem Aeternam", we are on another plane.  Best Prom of the 2014 season so far!

Please explore my other posts on Britten and Britten's War Requiem on the BBC Proms and on war. More on this site about Britten than any non-dedicated site