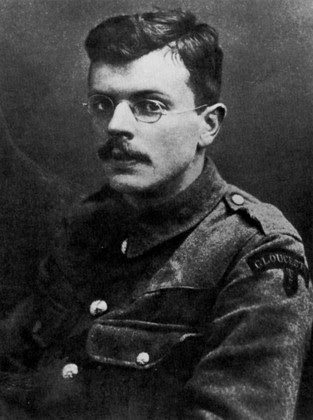 Will Ivor Gurney at last receive the recognition he is due? His War Elegy received its Prom premiere at BBC Prom 20. Gurney's poetry is so well known that it's even taught in schools. so you'd expect that there might be a ripple of interest in the print media. Did millions die to make the world a safer place for Kiss Me Kate and War Horse?

Gurney's War Elegy is fascinating because it moves as a processional. The music seems to approach from a distance. Long, surging lines suggest  forward thrust, percussion pounding like a savage metronome. How grand those long lines seem, and yet so sad. They give way to a more contemplative mood. A solo woodwind plays an elusive melody that soars upwards until it merges with the strings in a new, fuller theme which itself ends when the horns enter. Darker undercurrents make their presence: basses and cellos pick up the "march" the prercussion had earlier defined. Yet again, the full orchestra leads forwards, trumpets and horns in command. Gurney's very structure incorporates  relentless forward movement. Wave after wave, tutti and spareness. Eventually the music rises to a grand crescendo, but cut through with sharp brass calls.: not quite disssonant but enough to dispel comfort. Perhaps this is the heart of the piece, where Gurney is making his point. Soon after, the music recedes, as if those who marched past us for a moment have vanished, pulled away beyond our hearing.

Gurney was only 30 years old when he wrote the War Elegy, yet it is a singular advance on what he'd written before. He's best known for his song settings, so one might ask:   "What Gurney orchestral music?"  as Ian Venables prefaced his talk at the Three Choirs Festival in 2010.  (more here).  In the disruptions of Gurney's life, unpublished manuscripts went missing. Fragments remain, though, and now the Gurney Archive at Gloucester is being carefully mined by Venables (himself a composer), and Philip Lancaster. It's now known that Gurney wrote quite a bit, including two symphonies, and even planned an opera based on  J M Synge's Riders to the Sea, whose theme is also the relentless progression of death.  Read more here about how Venables and Lancaster worked on Gurney's War Elegy.

Gurney's A Gloucestershire Rhapsody and the War Elegy were written around the same time, and completed in 1921, but the War Elegy is much more sophisticated as music, and much more emotionally charged. What might Gurney have heard if he hadn't been incarcerated during the later 1920s and 1930s when so much was happening in musical Europe? His was an original mind, not necessarily one to follow safe convention. I've been listening to Gurney's War Elegy repeatedly (link here) because on the night of the Prom I was in Worcester for the Three Choirs Festival (more here). Just as well. At home I can cry quietly for what we lost in the tragedy of Gurney's life.

Martyn Brabbins conducted the BBC SO. He conducted the Philharmonia in 2010, so he's a bit of a Gurney maven. Prom 20 also included Sally Beamish's The Singing (2006)  a concerto for accordion, played by dedicatee James Crabb. Accordions and bagpipes operate in the same way, but bagpipes make savage music. Crabbe's accordion playing beautifully evokes the horror of the Highland Clearances, ethnic cleansing in the British Isles, not really so long ago. For an encore, he played a transcription of a Rameau piece for harpsichord. Accordions are much under-rated.

Brabbins also conducted William Walton's Symphony no 1. Nice performance, without the turgid shallowness that has put me off the piece for years.
at August 04, 2014