The Fourth of August 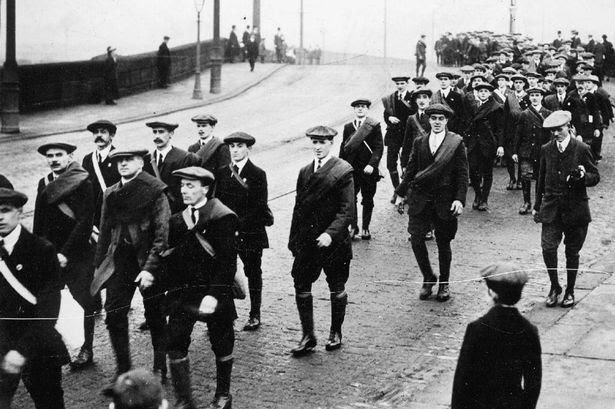 The Fourth of August 1914, when Britain declared war on Germany. When war seemed a glamorous, jolly jape.  Lawrence Binyon's poem "The Fourth of August". Yow! Rhyming couplets and a beat as rigid as marching footsteps. The banality is terrifying. Then look at the penultimate verse. At least when Elgar set the poem to his Spirit of England  (read more here) he moderated the violence. I grew up with Lawrence Binyon books on art,  never connecting him to poems like this. It's much more belligerent than the more famous "For the Fallen" but there's time for that in the years ahead.  Yow, the rhyming couplets and steady best, like automatons Lots more war poetry on this site - look up Ivor Gurney and Wilfred Owen.

The Fourth Of August

Now in thy splendour go before us.
Spirit of England, ardent-eyed,
Enkindle this dear earth that bore us
In the hour of peril purified.

The cares we hugged drop out of vision,
Our hearts with deeper thought dilate,
We step from days of sour division
Into the grandeur of our fate

For us the glorious dead have striven,
They battled that we might be free.
We to their living cause are given;
We arm for men that are to be.

Among the nations nobliest chartered,
England recalls her heritage.
In her is that which is not bartered,
Which force can neither quell nor cage.

For her immortal stars are burning
With her the hope that's never done,
The seed that's in the Spring's returning,
The very flower that seeks the sun.

She fights the force that feeds desire on
Dreams of a prey to seize and kill,
The barren creed of blood and iron,
Vampire of Europe's wasted will.