The mystery of George Butterworth 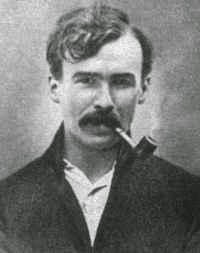 Roderick Williams sang George Butterworth Songs from A Shropshire Lad at tonight's BBC Prom 41 at the Royal Albert Hall. Williams is by far the best best British song specialist around. He has such a warm. conversational style which makes his singing direct and personal. (Read more here) .For my review of the Lest We Forget Prom read here).

The photo at right show George Butterworth  in civilian days. Read Michael Barlow's biography "Whom the Gods Love," (more here)  It's good, given the sparsity of source material. Butterworth was a very private person, and shielded himself from such things as prying historians. There are so many mysteries. Why did he destroy his unpublished music when he went to the front? There are no Butterworth descendants any more - George and his only male cousin died without issue. So perhaps we could  use modern intuition and reflect.

Butterworth's father's archives are in Oxford, but they're not completely reliable because they were compiled by a man who loved his son dearly but probably didn't understand his complexities any more than he understood military procedure. After reading Barlow's book I went to the War Office Archives to read regimental documents. Shock! No "Butterworth" listed!  However, being a good archivist, I think like a detective. I found the original war diary kept by the commanding officer of Butterworth's unit, where each day's events were written as they happened, sometimes in pencil.  I found the actual record of Butterworth's death. Read my account "George Butterworth in the trenches" . I also found his original medal citations by searching under his third forename, Kaye. Somehow, by accident or design, he had been listed as Kaye-Butterworth rather than Butterworth when he signed up.

Finding the war diary is easy enough because British officers' records are extensively documented. But that started another mystery. His fellow soldiers didn't even know he was a musician.  He wasn't actively hiding anything because the army contacted his father after his death. But one wonders who Butterworth might really have been. An Oxford don, on seeing the student Butterworth with a friend, remarked that they were two of the "reddest" revolutionaries in Britain.

Why was Butterworth keen to keep his lives as soldier and composer apart? Was he gay, or conflicted about his father's remarriage ?  By the standards of his time, A E Housman was about as much out of the closet as was possible. The poems in his collection of A Shropshire Lad are heavily homo-erotic. Obviously, orientation doesn't dictate art. The very hetero Ralph Vaughan Williams's On Wenlock Edge is based on Housman's poems too.  But one wonders what Butterworth might have achieved had he not been killed so young. Would he have stayed in the Cecil Sharp fold  with its repressive neo-fascist style? Would he have found a creative breakthrough like RVW? RVW adored him. His  London Symphony was inspired by Butterworth, who pushed RVW towards symphonic writing.  Even Carlos Kleiber liked Butterworth's orchestral music. We shall never know what Butterworth might have achieved,  but I suspect we shouldn't assume that Butterworth was "simply" a writer of folk-inspired songs and pastorals.

"Would he have stayed in the Cecil Sharp fold with its repressive neo-fascist style?"

That brought me up with a start and made me think. Would you care to elaborate a little on that - I'd be fascinated to learn more.

I entirely agree with you about Williams: I would venture that he has the best English diction of any baritone since the late John Shirley Quirk.

since I worked on Butterworth 10 years ago nerw materoial has come up, some of which might explain the hyphenated "kaye-butterworth" which is a bit of n anomaly. Watch this space, exclusives coming soon

Surely you mean the "cup cake fascism" of a branch of English culture that is overly sentimentalised, class ridden and maudling. Betjeman springs to mind, but far more right wing were T S Eliot and Yeats, which the British Establishment has campaigned to the status of great literary figures.

Anybody tuning into the week long "Composer of the Week" programmes on BBC Radio 3 concerning Butterworth and his peers would have wondered if he had not sprung from a certain background would he have ever received the attention he gets today from the chattering classes in England today?

The music was uniformly dreary and one level - compare with the Continent around the time perhaps Ropartz or the Vienna School! Really it is low quality.

In other words Butterworth and his peers deserve to sink into obscurity with the possible exception of one or two of his vocal works purely as reminders.

Butterworth even at his best reminds me of Goethe's description of England as "Das Land ohne Music."