Wonderfully evocative!  In BBC Prom 49, Sakari Oramo conducted the BBC SO showing how exotic dreams and magical tales still inspire creative art.  The soloist was Anu Komsi, Oramo's wife and twin sister of Piia Komsi, both coloraturas with such remarkable range that they've inspired several works written specially for them.. Although this Prom was billed "Russian Fairy Tales" it could well have been billed as a showpiece for Anu Komsi's exquisite singing. .

Ravel's Mother Goose Suite (Ma mère l’oye)  created the perfect mood. Lustrous, shimmering textures, sparkling with light and delight. Fairy Tales are beautiful, but strictly speaking they're wasted on children. As Bruno Bettelheim demonstrated decades ago,  fairy tales deal with the subconscious, and are a lot darker than they're made out to be.  Beneath the gossamer in Ravel's music lie details which suggest something more sinister. Hollow-sounding woodwinds, brass like the call of hunting horns. Could the high-pitched violins suggest pain and longing?  Do the horns suggest hunting, or death? Why is the princess of the pagodas, Laideronnette, supposed to be ugly? No answers.  In this magical realm answers mean less than dreams.

In Jukka Tiensuu: Voice verser (2012?),  Anu Komsi's voice operates like a magical force of nature. Her tessitura is so high it seems almost unearthly, and her projection so powerful that her voice seems to stretch into infinity. High winds and strings cry out, like high-flying sea birds.  Strings form elliptical sounds like waves.  Immediately I thought of Sibelius Luonnotar (more here) where the voice represents the primeval being who created the universe, after swimming for centuries in an endless ocean. When Komsi's voice switches from extended legato to sudden staccato, she makes gasping sounds that could be Luonnotar giving birth to the earth, stars and skies. Yet for all this extreme virtuosity, this is a quirkily humorous piece which  suggests play and joyful interaction between singer and orchestra. This is music with wit and and spirit, proving that "new" music can be fun and spark the imagination. We can also hear why so many are in love with Komsi's voice. She's technically superb but can also convey warmth and feeling. 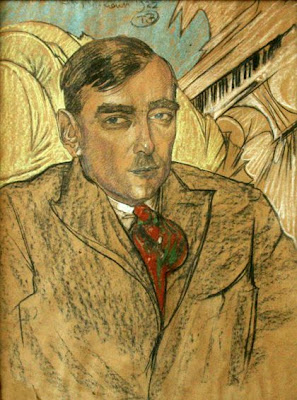 Amazingly, Komsi recovered her voice after the interval, to sing Karol Szymanowski's Songs of a Fairy Tale Princess. Komsi and Szymanowski could have been made for each other. Both favour tessituras so high that that they seem to defy gravity.  Much of Szymanowski's output created parts for violin, where only the best violinists can sustain extended lines at the top of register. Komsi makes great feats sound easy. Szymanowski's fantasy was far more than lush reverie.  In the years before 1914, he visited the Middle East and North Africa, fascinated by the exotic sounds he heard. Like many composers in his time, Szymanowski was searching for alternatives to  western tradition.  There's nothing tame about this ulullating legato, these strange leaps up and down scales.

In the first song, The Lonely Moon, the phrases cry out like imams calling the faithful to prayer, designed to carry over vast distances.  Perhaps this is intentional, for the mood suggests longing, reaching out towards something that can never be grasped. The trills and melismas in The Nightingale allow Komsi's voice to flutter like a bird trying to escape its cage. In The Song of the Wave, Szymanowski catches the idea of surging movement, sparkling arpeggiatos dancing over rolling rhythm. The ocean is beautiful, but the sailor might drown.  Whether the singer is lover or Nereid hardly matters. Szymanowski wrote the songs for voice and piano in 1913 orchestrating  the three above in 1933 when he'd rediscovered Poland and modernism. At this Prom we hear Sakari Oramo's new orchestrations for the three other songs,  sensitively  in keeping with Szymanowski's style yet sympathetic to the uniquesness of Komsi's voice. Infinitely better than the pointless, unidiomatic orchestration of Butterworth Andrew Manze used in his Lest We Forget Prom last week.

To complete this evening of exotic dreams, Rimsky-Korsakov Sheherazade. Yet again Oramo weaved his magic. The BBC SO played with great beauty, not disguising the little dark details that conceal what Sheherazade will be faced with if she can't spin more tales of fantasy.