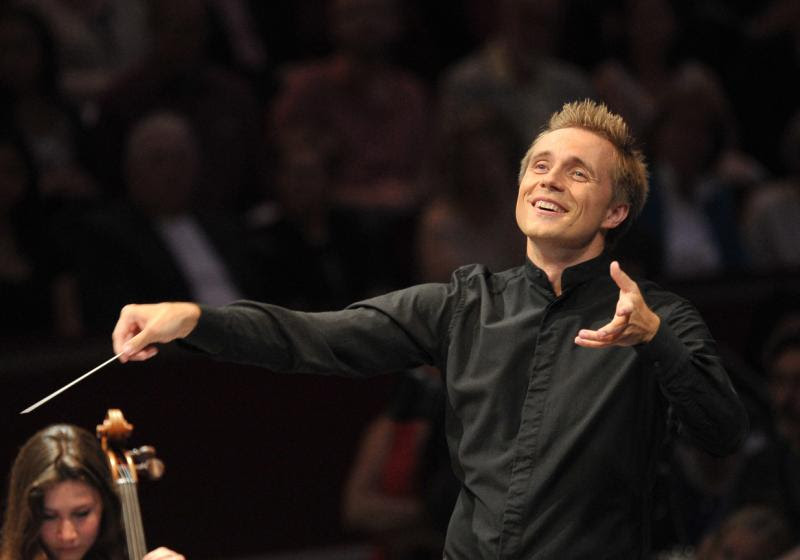 "For the unexpected is always upon us". a voice cries  out from the swirling complexity that is Luciano Berio's Sinfonia, conducted by Vassily Petrenko and played by the European Union Youth Orchestra at Prom  26. Some theories of the origin of the Universe deal with the concept of primordial chaos from which order, of a sort, emerged. Sinfonia might seem, at first, chaotic, but it is, in fact, a carefully thought through coming together of multiple different strands of human experience, operating independently, yet influencing the way we perceive the parts therein. There are quotes from Samuel Beckett and from Claude Lévi-Strauss, the anthropologist of myth. Musically, there are references to Mahler, Debussy, Hindemith, Strauss and even Stockhausen. Sounds interact, slipping in and out of consciousness. Berio even plays with time: there are sections in which performers can insert the present into the score. Hence, the singers of the London Voices say "Thank you Mr Petrenko" and refer to Shostakovich's Symphony no 4 with which Berio's Sinfonia shared the Prom.

Berio's Sinfonia is very much a piece of its time (1968-9), like Bernd Alois Zimmermann's Requiem for Doomed Youth (read more here)  Both quote Myakovsky, the revolutionary poet much loved by the radical left of the time. For a moment, many believed that a new world might emerge from the chaos of the post-war years. Both pieces create a grand collage of sound, referencing ideas and emotions beyong "pure" music. In our increasingly polarized world today, we should respect composers who believed in letting many different voices contribute.

Much is always made of Mahler's influence on Sinfonia, but unfortunately many who repeat the connection don't realize that the quote comes from Mahler's own quote from the song Sankt. Antonius Fischpredigt, in which Mahler is poking fun at a drunken saint preaching to a collection of fish who would never come together in Nature. Besides, the fish don't take heed. They go back to their fractious ways as soon as the song is ended. Berio is having fun, as was Mahler.  Berio is also alluding to Mahler's statement  that "a symphony contains the world". Perhaps it does, but an artist chooses his materials with purpose. There's nothing derivative in Sinfonia, despite the diverse sources: Berio was a true original.

That said, the European  Union Youth Orchestra should be credited for trying, and learning from the piece. It's not easy to pull off, but one hopes that the young players will have learned that there's more to music than repeating the usual fashionable clichés of Mahler influence.

Petrenko and the young orchestra followed with Shostakovich Symphony no 4, another piece too frequently discussed in connection with Mahler without much  insight. This symphony is huge - 12 basses - but this is as much part of the Zeitgeist of the 1930s in which it was written. Shostakovich admired Mahler, as did Benjamin Britten: they had a lot in common when they met. But Mahler didn't own the monopoly on funeral marches or on celestes. Like Berio, Shostakovich was writing an original work of his own.  Petrenko is a very good Shostakovich conductor. He approaches the piece with energy, bringing out the spartan  angularity in those syllabic footsteps, which could easily be heard as mocking Soviet conformity as the mimicking of Mahler. For all its vastness, this symphony has an asperity and bite that is all Shostakovich.