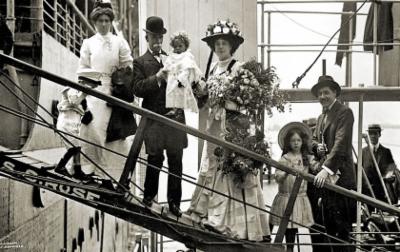 We can safely say that Clara Butt dwarfed most every other singer of her time. The photo shows her embarking across the Atlantic in 1907 with her family in her wake. Which was more magnificent, the P&;O liner  or the diva ?  Clara Butt stood 6 foot 2 without high heels. She had a remarkably wide range and volume: when she sang in Dover, it was said she could have been heard in Calais. Imagine a voice like that in an opera house! Alas, she never sang a Prom at the Royal Albet Hall.  Her Land of Hope and Glory would have brought the house down and terrified the Huns into abject submission. Below, her first recording of Land of Hope and Glory, from 1911. In her 1930 version, her voice isn't quite so good . Play it full volume for maximum impact.

I've been listening over and over to Alice Coote singing Elgar's Sea Pictures because she's so wonderful; earthier and more mysterious than Janet Baker, whom I love dearly. Both Coote and Baker are wonderful. But Clara Butt is something else. In her time, singers weren't intimidated: they did crossover and other things singers would not dare do today. When Butt premiered Elgar's Sea Pictures in 1899 at Norwich, she took the sea imagery to another level by wearing a mermaid costume . Oh, that the moment would have been preserved for all time! Nowadays she'd be the Butt of all jokes, but I suspect she would have given as good as she got.  She only recorded one song in the set, "Where Corals Lie" but recorded it twice, once in july 1912 in Hayes Middlesex and again around 1920 for Columbia. listen to that recording below. Notice how ropey the orchestra is. They sound like they're imitating a jazz band. Admittedly, Elgar's rhythms are jaunty but any conductor taking such liberties would be crucified today. Butt makes the most of the leaps up the scale, throwing her voice to the winds, so to speak.  So much for polite orthodoxy!