The Forgotten Soldiers of Empire

If you do only one thing to remember the First World War do this : watch David Olusoga's powerful documentary Martial Races on BBC i-player (link here)  This opens up a whole new dimensions which many British people know nothing about. We're never going to appreciate the magnitude of 1914-1918 until we appreciate its world-wide significance.

Did Empire save Britain and France? Could they have won the war without using colonial nations?  A million African, Indian, Black American and Chinese people took part, some fighting front line in the trenches, others supplying the back-up labour without which no army can survive. Hundreds of thousands died, and each man left behind a family and a community. These men didn't march off to war cheering. They were not volunteers, but men trapped by circumstances. In Africa and Asia, people were so poor that men would join up from sheer desperation.  Many of the Africans were rounded up by agents and chained. Slaves, not jolly volunteers fighting for a cause. 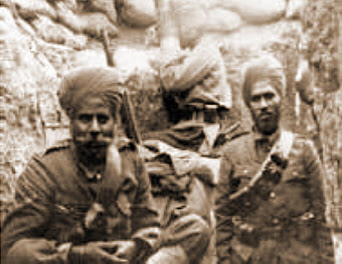 These men were simple peasants who didn't know much past their own villages, far less about the world. Thousands had never worn shoes in their lives. Suddenly they had to wear heavy, ill-fitting army boots and live in damp trenches.Nowadays even in remote areas people have TV, internet and mobile phones, even a smattering of education. A hundred years ago, these peasants might as well have been rocketed into space, so alien was the environment they found themselves in. Even now there are dozens of different language groups in Africa and Asia. A hundred years ago men from diffrerent villages might not speak the same dialect. Suddenly they're all thrown together, with hardly anyonen to talk to.

The concept of  "Lesser breeds" underpinned Imperialist thinking. The West didn't colonialize for love. Social change and modernization were side effects, not goals. Olusoga reads from British Army records which describe the different communities of the Indian subcontinent as if they were breeds of dogs or horses. Unpleasant as these things are, we need to acknowledge them if we're  to move on.

1914-1918 was a world war, with global causes and global consequences. It came about in many ways as a continuation of colonial rivalry. The British and the French grabbed colonies first, excluding the Germans, Japanese and Americans.  1914-18 didn't happen because some Serb shot an archduke. In the Middle East, the Germans (and their allies the Turks) were struggling with the Russians and British for control of oil fields. Then, as now. And so the British and French used their "resources" in the form of human fodder.

Olusoga's documentary is meticulously well researched and presented. This is the kind of exceptional high quality that the BBC was once known for. Most of this material is well documented in academic circles, but there's  material here that's never been seen in public before. Olusoga makes it human and personal.  To understand our present we need to understand our past. This series is very, very important.