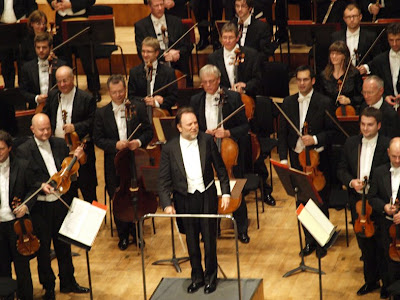 Triumphant start to Riccardo Chailly's  Leipzig Gewandhaus Beethoven cycle at the Barbican. This is major. It feels like a pilgrimage in reverse, because the Leipzigers are touring, bringing their Beethoven live to audiences in Vienna, Paris and London.

The Leipzig Gewandhaus was founded in 1732, before Beethoven was born, and its permanent orchestra in 1781, when Beethoven was just a boy. To Leipzig audiences, Beethoven himself was once "new music". This orchestra has a fabulous reputation. Nearly everything they do is interesting. When Riccardo Chailly went to Leipzig, some wondered how he'd develop the ochestra's traditional rich, warm sound. But the relationship was a match made in heaven. Together, Chailly and the Leipzigers have produced truly amazing things. They're phenomenal. The new Chailly/Leipzig Gewandhaus full Beethoven Symphony boxed set, just out, should be unmissable, even in a market gorged with Beethoven cycles. It's not on amazon yet, but you can buy copies in the Barbican foyer. 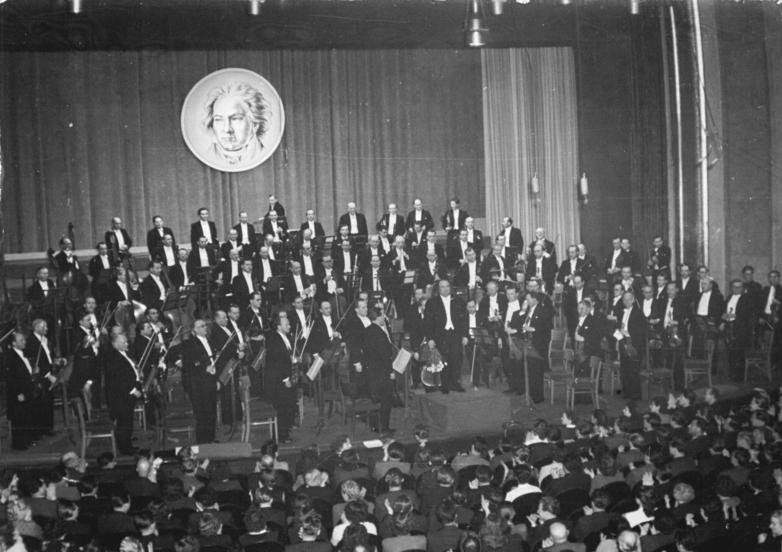 The Leipzig Gewandhaus Orchestra's Beethoven tradition goes back to when Beethoven was a "living composer". This photo shows the orchestra's Beethoven tribute in Berlin in 1952, with Franz Konwitschny. Perhaps being in the DDR preserved the orchestra's musical integrity, as it wasn't subject to commercial influences, but Leipzig has a radical tradition. The protests that started in the nearby Nikolaikirche, supported by Kurt Masur and many members of the orchestra led to the overthrow of repression and the re-unification of Germany. In 1989, a few weeks after the protests, the Leipzig Gewandhaus orchestra made what was then a rare appearance abroad. It was an emotionally-charged experience, for them as well as the audience. I remember them looking up at the Sheldonian around them, their faces lit up with awe. It can't have been the architecture, since there's just as much (or was) in Leipzig as in Oxford. It must have been the sense of occasion. And they were playing Beethoven 3, the "Eroica".

Under Chailly, the Leipziger's Beethoven is heroic, too.  Beethoven's Fifth Symphony is so wonderful that it even sounds good when played by school bands. The Leipzig Gewandhaus Orchestra lifts it into another stratosphere altogether. Chailly's tempi are fast, so the music feels driven as if by metaphysical forces, yet the orchetra is so technically secure that there's no strain whatever. This is Beethoven, exhilarated by the discovery of the new, in music and in the times he lived. Such energy, though I suspect the recording and other performances will be even better. Oddly, the pauses between movements were unusually long, which I don't understand. Chailly was mopping his brow a lot. But if he's under the weather, he's still leagues ahead of most anyone else. In 20 days, Chailly and the Leipzigers have performed 19 concerts - 8 more to go !

This traverse of Beethoven Symphony no 2 was more stately, for it's not as shockingly innovative as the Fifth. The second slow movement here was elegantly structured, emphasizing Beethoven's mastery of form, the bedrock which sustained his audacious ventures into new territory.

The Leipzig Gewandhaus Orchestra performed most of Beethoven's music when it was contemporary, so it's appropriate that it should commission works by present day composers showing their response to his example. Beethoven's Fifth is such a towering phenomenom that it's become part of world culture. Even those who've never heard of Beethoven as composer know his name through Beethoven the Dog movies. Beethoven 5 eclipses all else, so respect is due for Carlo Boccadoro's Ritratto di musico, which held up credibly. Boccadora reimagines the Fifth, focusing on the relationship between strings, winds and brass, but with prominence given to timpani, percussion being a 20th century addition to orchestral colour. It's almost like a jazz combo writ large, with interesting syncopated effects. I particularly liked the solo bass being tapped, not plucked or bowed, the wood producing a nice archaic sound, a reminder of the period instruments Beethoven and the Leipzigers' ancestors would have known.
at October 26, 2011