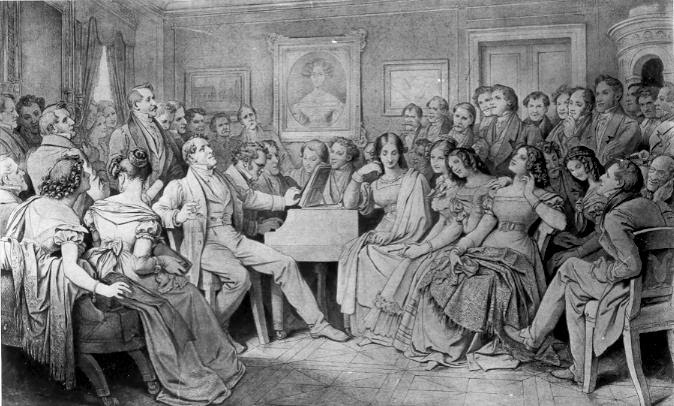 What might Schubertiades have been like? At the Oxford Lieder Festival, we probably come close. The atmosphere is intimate, many in the audience are old friends. Often, Schubert's audiences were the performers. In those days before recording or radio, people made their own music, at home or in genial company.  Part of being socially "accomplished" then meant learning the piano or guitar, and singing.

This year's Oxford Lieder Festival focuses on all the songs Schubert wrote in the last years of his life, so the programme on Saturday night was eclectic. In the first part: two Schlegel settings (Abendlied für die Entfernte D856, and Abendröte D690, and two Schulz settings, Im Walde D834 and Um  Mitternacht D852. :and a setting of Schubert's rakish friend Franz von Schober Schiffers Scheidlied D910, who is in the Moritz von Schwind drawing above (tho' I can't remember offhand which one he is). Singers Raphaela Papadakis, Victoria Simmonds, Nicky Spence and Mark Stone who sang an all-powerful Die Allmacht D852. Schubertiades tapered off as Schubert's friends married and/or went off to other pursuits, but von Schwind is recalling Schubert himself at the piano, sometimes joining in with the singing in his light tenor. Sholto Kynoch didn't sing, but his playing was particularly eloquent and graceful. That's why I kept thinking "Schubertiade", where the man at the piano is the one we should never overlook. For a change I could luxuriate and enjoy the piano part. All five joined together for Gebet D815, voices interweaving and alternating. It's not a very sophisticated song but when five performers are in harmony like this, it's a good experience.

What a pity that I was so tired I couldn't make the second half, because the offerings were even more unusual. Nun wer die Sehnsucht  kennt D877/1 in the version for two voices, two settings of Wilhelm von Schütz, better known as a dramatist, Lied der Delphine D857/1 and Lied des Florio D857/2, both of them songs of veiled flirtation, perfect for home performance where players could say in song what they dared not express directly. Der Hochzeitsbraten D930 is much more buffo, and often gets included in part song programmes because it's a hilarious skit, a mini-mini opera that lasts a few minutes but has major impact. Therese and Theobald aree getting married, so they go poaching to get supplies for their wedding feast. Kaspar, the gamekeeper (good part for a baritone who can act, as Stone does) catches them red handed. Theobald tries to bribe Kaspar, but Therese flirts with him, which is rather more effective. You can guess why this song, sung with gusto, is often a show stopper. Here, though, the concert ended with Der Tanz D826. This was an inspired choice, given that Oxford Lieder is focussing on Schubert's last years., It's a dance, but more danse macabre than peasant hi jinks:
Es redet und träumet die Jugend so viel,
Von Tanzen, Galoppen, Gelagen,
Auf einmal erreicht sie ein trügliches Ziel,
Da hört man sie seufzen und klagen.

(for translation, see Emily Ezust's wonderful Lieder and Song Texts page, link at right - an essential  resource for anyone interested in voical music.
at October 16, 2011