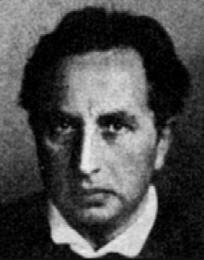 It's a gloriously affirmative work, passionately reasserting the ideals of Bach and Beethoven. "Music", Kaminski said, should motivate people to "trace the roots of life and the meaning of human existence". He saw his duty as "bearing witness to the light".

Kaminski's Dorian music starts without hesitation and goes straight into full development, buoyed up by confident purpose. This isn't abstract music for its own sake. Beethovenian forward thrust, direct quotes from Bach. To quote the Berliner Philharmoniker notes "from polyphonic concentration....Kaminski creates free flowing spatial music characterized by extreme tempo and rhythmic shifts....It is a genuinely forward-looking work, gripping in its unique mix of eruptive energy and mystical immersion".

It's amazingly uplifting, and spiritually powerful. Yet, note, it was written and first performed in 1934, by Herrmann Scherchen in Switzerland. What, one might think was there to be so confident about? Kaminski's response was, on July 4, 1933, to create an “order of those that love”. The rules of this order demanded that its members “hate no one and nothing, and must not be seduced into hate by evil willfulness or abusive actions. Hate is to be overcome by No-Hate”. Advocates of non-violence, like Gandhi, and Aung San Suu Kyi  think that breaking cycles of hate might just work, though Kaminski's faith in the context of the horrors that were to come might seem naive.

Kaminski was involved with the liberal Munich avant garde, from which his ideals may have sprung, but he was also part of the "inner resistance" of K A Hartmann and others. Perhaps, too, Kaminksi's principles may have come from his father. Kaminski senior had been a Catholic priest, who'd quit the priesthood on principle after the First Vatican Council in 1869/70 (the one that introduced papal infallibility). So in a sense, we owe Kaminski's birth to his father's opposition to the Pope. But the Kaminski family were originally Jewish, from Poland. This status seemed to have confounded the Nazis. He lost his job in Berlin in 1933, apparently for political reasons, but his music wasn't banned until 1938. Then the ban was lifted in 1941 because they thought he was a quarter Jew not a half-Jew. Racial stereotypes aren't rational. Life wasn't kind to Kaminski. He lost most of his family during the war and died himself soon after. But when I listen to his Dorian Music, it's vital, humanistic spirit seems unextinguishable. The piece isn't available on CD, though there are clips on Universal Editions. All the more reason to cherish the Berliner-Philharmoniker performance, which is perhaps as good as it gets. Here are other sources of information, the Kaminski website and an interesting German website.
at October 07, 2011