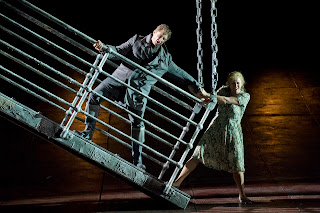 When this production of Wagner Der fliegende Holländer premiered at the Royal Opera House in February 2009, Bryn Terfel was its raison d'être.  His absence was sorely felt, even by those who aren't usually seduced by his charms. In this revival, the draw was Jeffrey Tate's return to Covent Garden after nearly 20 years.

Minimal stagings can work when they highlight meaning and music. Tim Albery's production (designed by Michael Levine) is a blank canvas, which styles The Flying Dutchman rather than suggests much about who he is. No portrait of any kind in sight.  Instead, a toy boat. The boat itself is wonderfully staged, and it's a masterstroke to see real water on stage, lit so its reflection shines magically into the auditorium. But it doesn't convey the wildness of the open ocean, nor the turbulent psychic storm around which this opera predicates. 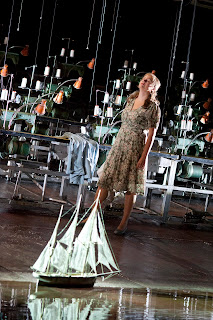 Perhaps Albery's interpretation is that the opera predicates on Senta and her frustratons,  the Dutchman being a projection of her fantasies.  Anja Kempe's Senta was extremely impressive in 2009. Then, she was a perfect foil to Terfel's solid, taciturn Dutchman. Kempe's energy created Senta as driven to extremes to escape what to her might have seemed mind numbing conformity. The Dutchman is her "get out of town" card,  rather than a cursed soul. It's a valid interpretation, given Albery's factory staging of the spinning scene, and marginal references to the haunted ship. It's a concept worth exploring, though rather too simplistic. Senta's not Tosca. Wildness is tricky to sing into this part, and occasionally Kempe relied more on forcefulness than finesse.  Nonetheless, she can do it well, and should settle further into the run.

Egils Silins was a late replacement for Falk Struckmann as The Dutchman. This was his Covent Garden debut, and possibly his highest profile performance to date. Although his voice isn't particularly distinctive, he's secure vocally and does seem to have a feel for the part. In a production where the singer has more to work with and is less exposed, he'd make a bigger impact. Part of this stems from Albery's approach, where the Dutchman is reduced to little more than Senta's dreams.  It takes an unusually powerful and charismatic singer to counterbalance these limitations.

Stephen Milling's Daland was forcefully secure, even too noble, given that the character has an unpleasant streak of venality, which would work well in Albery's concept, but wasn't developed. Still, it's enough that he sang well. Endrik Wottrich's Erik had problems with pitch and intonation, but was reasonably well acted. Clare Shearer's Mary was excellent - no fault of hers that the role here was a cipher. 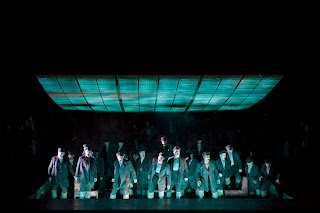 The role of Steersman is much bigger, and critical to the plot, for the Steersman is guides the ship into the distance. Both Senta and the Steersman dream, but Senta can't think past the present. John Tessier has to sing suspended up a rope ladder, but hasn't quite the character to make the part as compelling as it might be.  But then many productions don't make enough of the role, and this production doesn't, either. It's odd, given Albery's interest in images of conformity, as the Steersman is part of the crew. As always, the Royal Opera House choruses sing and move perfectly. The vocal battle between the Dutchman's crew and Daland's crew isn't quite as horrific as it might be, but the Steuermann, laß die Wacht! refrain was sung with such jaunty zest that it left no doubt that these sailors and their families had no time for spooks and neurosis.

And so to Jeffrey Tate's long awaited return to London. Fortunately Albery did not stage the protracted Overture, so we could concentrate on the orchestra. Tate's pace was electric, injecting the malevolent atmosphere the staging tried so hard to suppress. The energy dissipated at other points, which was a kindness to the singers, who didn't have to compete, and to Albery's staging, which was so much at odds with the demonic, elemental fury in the music. When the Dutchman's crew descend back into the bowels of their ship, Tate lets the orchestra burst forth again. They're back on the ocean again, metaphorically defying storms and tribulations.

Please read the review which will appear shortly in Opera Today, and the review from 2009. .