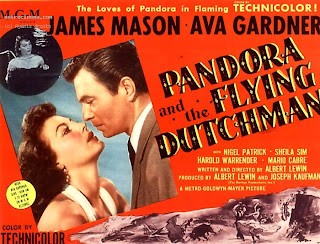 Wagner Der fliegende Hollander starts tonight at the Royal Opera House. (Please see my review HERE) But here's another Flying Dutchman but not as we'd know it. The music isn't Richard Wagner but Alan Rawsthorne, a combination of lurid technicolor and stiff upper lipped Britishness.

What's more the Senta character is Ava Gardner, and she gets to sing the arias, too. Indeed, she plays the Dutchman as well, wandering through life unable to love, though her beauty drives men mad. "The measure of love is what one is prepared to give up for it". So a man throws his precious racing car over a cliff, another committs suicide. But she doesn't care.

This Flying Dutchman is set in sunny Spain, so the film can work in a long, implausible reference to Carmen and matadors. Spain is also warm enough that Ava gets to swim stark naked out to the mystrerious yacht in the bay. Onboard she meets The Dutchman, who paints portraits instead of being in one. He paints her! It's James Mason. Bizarrely, the Daland character is an archeaologist who's found a manuscript supposedly written by the real Flying Dutchman in the 17th century, who killed his wife (Ava) thinking she was unfaithful. Hence the curse.

Then the movie turns from Wagner to Carmen. Montalvo the matador is Ava/Senta/Carmen/Pandora's ex, so we get to watch a long drawn out scene in the bullring, where he gets killed, not Carmen. Montalvo had tried to kill the Dutchman, so he's Escamillo and Don José in one. Meanwhile Ava/Pandora/Senta realizes that she loves the Dutchman so much that she'll give up her life for him. She dumps the Erik character (the racing driver) she's about to marry and swims out to the yacht. That night, a demonic storm. Next morning, two bodies wash up on the beach.

Interestingly, this movie was made just before Ava Gardner became a major star. She was a Southern belle, but dusky enough to play exotic characters rather than the Bette Davis type. Rumour has it that Ava passed for white, but wasn't. Hooray again for people who break out of racial stereotypes!
at October 18, 2011