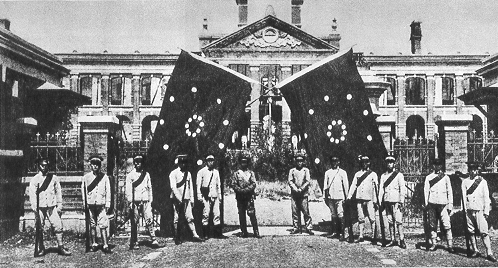 On 10th October 1911, the outbreak of the Chinese Revolution. A revolution that happened almost by accident, evolving from what seemed to be a relatively small local dispute about railways. Sun Yat Sen was abroad, and most of the major political activists were caught unawares. Only a few months before, there'd been an insurrection in Guangzhou (Canton) but then the Manchu rulers reacted savagely. The "72 Martyrs" are commemorated in Yellow Flower Hill, one of the monuments of the Chinese revolution. In Wuchang, however, the dissidents were armed western style militia and held the Manchu armies at bay for 41 days, buying time for the political wing to organize. As revolutions go, the Wuchang Uprising was relatively contained. Five thousand died, mostly soldiers, but compared with what was to happen later it seems so innocent. This time, the Manchu regime collapsed internally, without a struggle, and by February, the child Emperor abdicated. Yuan Shih Kai, a Chinese who theoretically led the Manchu armies, might very well have established himself as the new Emperor, but the idea of a democratic Republic had taken hold. Above a short clip about the background, below historic archive footage of Wuchang 1911.