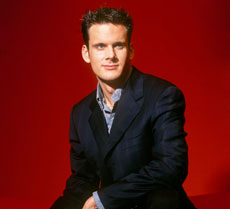 Philippe Jordan has been named new Chief Conductor of the Vienna Symphony Orchestra, from 2014/15 when Fabio Luisi steps down. Jordan is the son of Armin Jordan the distinguished Swiss French conductor, but he's made an even bigger name fort himself in recent years. I first heard him conduct Wagner Tristan und Isolde when he was still very young in Switzerland. Terrible production and principals but Jordan saved the show. Since then he's gone on to greater things, conducting everywhere. He can even conduct Mahler with spirit. And he dances too, which makes him elegantly expressive on the podium.
photo : J Ifkovits
at October 06, 2011