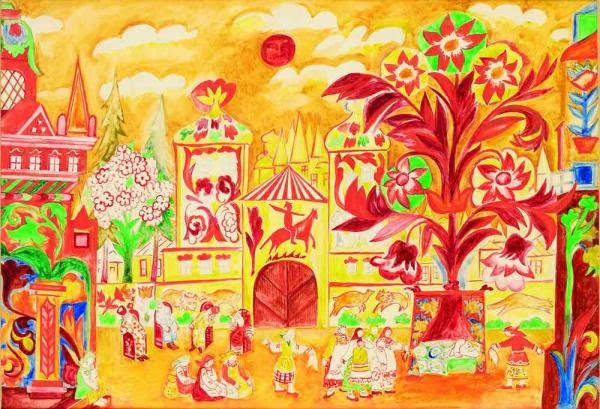 The historic complete recording of Rimsky-Korsakov The Golden Cockerel (Le coq d'or) is available online for a week on BBC Radio 3
This is the famous 1985 recording from Bulgarian radio. It's so vivid that your imagination can create the scenes more gloriously than any "real" production constrained by practical concerns.

The main body of the opera is prefaced and followed by a short scene in which The Astrologer tells us what's about to happen. It feels like he's opening the lid of a lacquered box, so the contents spill out like amazing, fantastic jewels. You don't really need a libretto - everything's so sumptuous that words almost get in the way. The Astrologer should be a tenor altino, a tenor with an extremely high range that's almost falsetto. Tessitura to challenge reality. This is fairy tale in music, glorious illusion for its own sake.

The plot isn't realistic, either. King Dodon thinks the Queen of Shemaka is invading his land. The Astrologer has a Golden Cockerel that can speak. The King's sons attack the Queen but are smitten by her beauty, and are killed. Next, the King is smitten, too - who wouldn't be seduced by the Queen's arias? Trills and mellismas so fiendishly impossible that you're left gasping, how does she do it? Magic, of course. Then the lethal kick that's at the heart of every good fairy tale. The Astrologer wants the Queen as his reward for helping the King save his country  The king kills the Astrologer, but the Golden Cockerel kills the King. Magnificent fugue at the end of Act 3 (the end of the main opera) : a magic storm that chases the Kingdom away. Then the Astrologer returns, announcing that it was all fantasy. The lid on the gilded lacquer box is closed again.

This performance is fabulous, in the real meaning of the word. The conductor, Dimiter Manolov, shapes details like a jeweller crafting gems: tremulous strings, resonant but clean vibrato, swooping diminuendos that cut through the richness, reminding us that under the magic, there's something unnatural and even chilling.

The Golden Cockerel is well known as Diaghilev's Le Coq d'Or where ballet was added to make the heady concoction even more potent. The picture above is one of Natalia Goncharova's designs for the Ballet Russe. She made equally splendid designs for each scene, even for backdrops and the opening curtain. How spectacular it must have been!  And then the 1914-18 war and the Russian Revolution. So maybe The Golden Cockerel is a last glimpse of a magnificent dream.

Overnight broadcasts like "Through the Night" are full of hidden treasures like this Golden Cockerel, and serve a purpose, especially for more eclectic (and discriminating) tastes.  Apparently they might be phased out as part of the BBC cuts. Already, there's no music on BBC Radio 3 after 10 pm. Technology has changed. Time slots are irrelevant in our 24/7 internet culture. So it's vital that we give "Through the Night" credit. Real enthusiasts don't switch off at 10 pm and go to bed. They're listening everywhere at different times. Please read more here about why we should be worrying about the long term implications of then BBC cuts.
at October 20, 2011

Email ThisBlogThis!Share to TwitterShare to FacebookShare to Pinterest
Labels: Rimsky-Korsakov

Thank you as always for your insights. Euroclassic Notturno ie "Through the Night" is produced by BBC Classical Music on behalf of the European Broadcasting Union. Since this program is coproduced by UER, it is broadcast on several radios with Internet outlets, from Sweden to Romania. It boasts 1 million listeners. Is it scheduled to disappear completely? Or will listeners have to listen to it on other radios than BBC? Sad that money crisis tends to wipe out the last veneer of culture available to people. Surely it is not luxury in our world. It sounds as if leaders had tested the Third World, so they guess people can survive just with the minimum and a little religion.