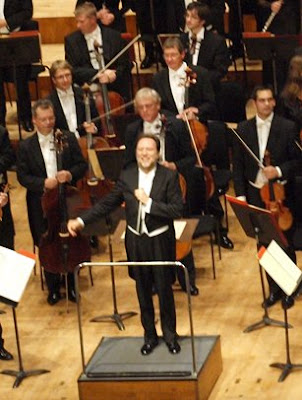 Riccardo Chailly and the Leipzig Gewandhaus Orchestra returned again to the Barbican, London, for the second concert in their Beethoven symphony cycle (read an overview and review of the first concert here). If anything, this performance was better than the previous evening. Tours are wonderful, but take their toll. The Leipzigers are playing 27 concerts in four countries in a month, plus masterclasses, media events and the necessary socializing that is a natural part of the business. Pretty heroic. Listeners have to make allowances. But it's a small price to pay for the sheer joy of live music experienced communally.

Chailly has been stressing Beethoven's modernity and the Leipzig Gewandhaus tradition of performing great music when it was still brand new. This is an extraordinarily healthy approach to music, given the regressive nonsense against modern music in some quarters. Chailly and Leipzig to the rescue!

This Beethoven 7th nipped along as if hardwired into some power source, yet its fundamental elegance shone through. Nicely poised first movement, a fine tension between the lyrical passages, pauses and the glorious forward thrust of the main theme. The allegretto thus unfolds spaciously from firm foundations. The repeated ostinato figures progress as if in procession. Canter into gallop in the presto. Rapid fire ostinato introduces the final movement, which builds up to whip-cracking fury. Yet the Leipzigers are completely disciplined, their energy focussed. Alarums, flying figures and firm, assertive final moments.

Steffan Schleiermacher's Bann, Bewegung mit Beethovens Erster (fixed, moving with Beethoven's First) was a perceptive opener. Schleiermacher's spellbound by innate tension in Beethoven's First, where elegaic lyricism confronts ostinato, the pulse alternately abrupt and sweeping. Stimulating conjunction. These new commissions aren't meant to be heard as stand alone music, so there's no point in sneering that they're not up to Beethoven standard. No one can be, Schleiermacher's piece is an imaginative reaction to Beethoven, and as valid as any commentary.

The Leipzig Gewandhaus Orchestra is off to Paris for the weeked - working - and back in London on Tuesday 1st. This concert is broadcast by BBC Radio 3 on demand. Listen to some of the spoken parts. So read me here on Classical Iconoclast to get things from source. Big grin !