Shocking but not wrong : ENO Castor and Pollux Rameau 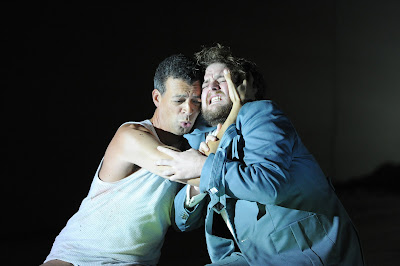 One reason why Castor and Pollux hasn't been staged in England is that Rameau is French.  Not because the British are xenophobic (which some are) but because Rameau's sensibility is so very different from what we might assume opera should be. This ENO production, a joint venture with the Komische Oper, Berlin, of Rameau's Castor and Pollux is surprisngly faithful to the real spirit of the opera and its times.

Castor and Pollux is an allegory, that grows not from the plot so much as from the intellectual response of the listener. Hence the formal stylization and long passages of music without dialogue or apparent action.  Little tour de force elaboration in the vocal lines for the sake of show. In Rameau's time, the musical passages would have supported dance sequences, to focus the mind on abstract depictions of the philosophical virtues the plot predicates upon. Don't assume this opera "needs" elaborate costumes that inhibit movement. To Rameau's audiences the abstract sequences were symbolic, more masque than amusement for its own sake. Castor and Pollux is a whole different frame of mind, which we may well have lost in this modern age with its focus on easily digested instant gratification.

Castor and Pollux are privileged men who have every reason to enjoy the pleasures of love and life. But they deliberately choose self-sacrifice for a higher destiny. They become the Gemini, preternaturally bright stars, that guide sailors through the sea. To quote a Schubert song, Dioskuren, Zwillingssterne.... mich beruhigt auf dem Meere, Eure Milde, euer Wachen. Twin Stars, who calm those at sea (in every way) with their watchful calm. They symbolize, no, less, faith despite adversity.

So, take your bearings from the fundamental meaning of Castor and Pollux and the production, shocking as it is, falls into place. Castor (Allan Clayton) and Télaïre (Sophie Bevan) are madly in love, but she's supposed to marry Pollux (Roderick Williams). Pollux's loyalty to his brother is so great that he magnaminously releases Télaïre, whom he loves too, so that she and Castor can be happy. In contrast, Télaïre's sister, Phébé (Laura Tatulescu), is so jealous that she conspires with an enemy to destroy the kingdom, which results in Castor's death.  Like twins, the sisters are dressed as a pair, but their closeness is the cause of the friction. Castor and Pollux  represent sibling love so strong that Pollux is willing to stay in Hades if his brother is saved.

Barrie Kosky's production (designed by Katrin Lea Tag) uses an abstract set but it's minimalist for a good reason as it throws what drama there is into stark, high profile. Although the stage looks bare, each of the panels is textured to reflect light. It shimmers luminously, like starlight. And like starlight, it's beautiful in an understated subtle way. Again, contrast. The huge mound that represents the earth and underworld isn't subtle at all, and quite dangerously angled, as if the singers might suddenly fall to their doom. 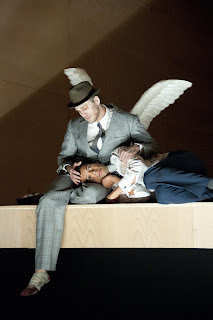 The sexual aspects of this production will titillate those who enjoy being scandalized, but there's purpose in that too.  Castor and Pollux is also an allegory on Death and Birth.  The dead Castor burrows into the ground and pops up again, as if the earth were a birth canal. But birth isn't possible without sex. Yet  its grubby aspects serve as counterpoint to the pure, rarified and non-sexual love between Castor and Pollux. If some of the scenes go on too long, that's because the music needs time to make its point. Fortunately, there's a lot of wry humour in the depiction, such as the series of knickers that will never end.  And those who give in to removing their knickers can't move with their clothes around their ankles. The idea, I think, is concealment and revelation. Or not, as they're in the realm of shadows.

The Hades scene was specially striking. All these images come from depictions of the underworld familair to the illustrations of the period. Ghoul masks and even references to Persephone and  Orpheus. The two men (the tall one's wonderful) with headresses of leaves and flowers connect to primeval  fertility magic, completely appropriate to the meaning of this opera. Jupiter (Henry Waddington) and his High Priest (Andrew Rupp) are represented in a way that period audiences would have recognized. As for nudity, anyone who's seen classical art or sculpture shouldn't be surprised.

Christian Curnyn's a leading baroque specialist, and the score was masterfully expressive. Superlative  period performance, highligting the fundamental precision and transparency in the orchestration. Rameau wasn't a music theorist for nothing. Small drums lightly brushed and tapped - absolutely no need for the banks of timpani that verismo would demand.  Exquistely delicate writing for strings, the refinement reflecting images of starlight.  The Gemini twinkle, but they're powerful forces in the firmament. Curnyn's light, but assertive touch was perfect. I didn't like the constant pounding of feet in the first Act, but in a way that underlined the pedestrian nature of the kingdom before the supernatural took hold. I thought of Lully, conducting with a staff, providing extra percussion. At the end,  Sophie Bevan runs round frantically. She represents physical energy, but she's going round in circles, since she has no higher purpose.


The tremolo in Allan Clayton's Castor was resolved as the performance progressed but was fine later. Roderick Willliams' Pollux was perfect, his delivery never forced or excessive, completely in keeping with Rameau's elegant idiom.  He has to do a lot of fighting in this part, rolling and writhing on the ground, which might take its toll as the run continues, but on first night, his singing was superb. Sophie Bevan's Télaïre was wonderful. She has animal magnetism, and youthful vigour: the positive side of earthly virtues. Her singing was clear-toned and pure, true to Rameau's high textures. How maddening Télaïre's purity must have been to Phébé, but Laura Tatulescu's characterization gives a relatively minor role strong impact.

Many things could be tweaked in Barry Kosky's directing, but this ENO Castor and Pollux has merits once you start thinking Rameau's terms.