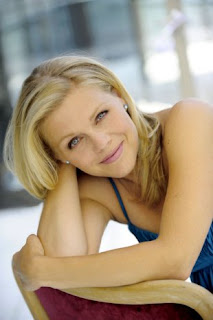 I have a friend who has worshipped Miah Persson since she was a student. So when she married and moved to England, he was bereft and I was thrilled. How fortunate we are to be able to hear Miah, especially at Glyndebourne. .Her Mozart is outstanding, but then, so too is her Britten, her Strauss, her Sibelius, her Mahler, her baroque..... She has exquisite lyrical tone, and a range that moves easily and flexibly. But what makes her special is her wit and charm. When Miah sings, you always sense musical intelligence. Megastar as she is now, she hasn't forgotten her roots, so it was wonderful to hear her at The Oxford Lieder Festival in a programme of Swedish songs. Indeed, she made her mark in Britain with her Hyperion CD "Soul and Landscape" in 2003.

"Soul and Landscape" refers to the Gösta Nystroem group of songs Själ och landskap, which she sang again in Oxford, this time with Matti Hirvornen, a superlative interpreter. Landscape is briefly sketched - snowfall, sea, rocks, wind, but the real landscape Nystroem and his poet Ebba Lindqvist are dealing with is internal.  Terrain is a metaphor for longing: open horizons of the soul. Matti Hirvornen shapes the delicate traceries, bringing out the elusive grace in these songs. He's much, much more idiomatic than Roger Vignoles was (sorry, but it's true). Persson's voice has blossomed beautifully, and she sings with much greater colour and depth. No comparison bertween the 2003 recording (where piano is too heavily miked) and this exquisite live performance.

Even more magical is På reveln (On the rocks) from 1948. Almost unbelievably diaphanous textures (Hirvonen is brilliant). The vocal part is luminous too. Livets drömlika skönhet....vin sin evighets rand. (life's dreamlike beauty... on the edge of eternity). The song is as gossamer as the wings of the white butterflies in the text, which flutter in the sunshine. Again, it's a mood poem, for the poet Anders Osterling is standing on rocks between sea and land. Soon the tide will draw in, and the night, and the moment will be gone forever.

Miah Persson doesn't often sing in places as small as the Holywell Music Room (120-140 at a pinch). She made no compromises given the size of the room, and seemed to relish the chance to sing as intimately as if she were singing in her own home. A set of Ture Rangström songs, to poems by Johan Ludwig Runeberg and Bo Bergman, (who lived until 1966). Echoes of Edvard Grieg (hear En Svane in Sommarnatten), but otherwise these songs occupy a strange, but comtemporary world even when the texts coyly refer to maidens and trysts. Pan is glorious. Livets stora hunger stiger stark och god, och mitt sommarblod sjunger. (Life's deep hunger rises strong and my summer blood sings.) Anna Larsson sang this same song the previous evening: a unique chance to hear mezzo and soprano versions in close proximity.

Grieg's German songs op 48, and Jean Sibelius's Swedish songs to conclude. Phenomenal phrasing, lovely warm timbre. Våren flyktar hastigt (Spring flys away swiftly) and War det en Dröm? Which summarizes the spirit of these songs. Scandinavian summers don't last long, and hard winters will return. But for a moment, live to the full and enjoy. Which summarizes so much of the life-affirming, open-hearted  nature of this music, despite its Sensucht.