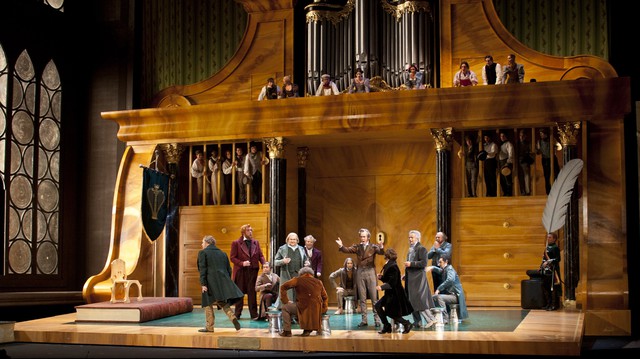 Stefan Herheim's Wagner Die Meistersinger von Nürnberg in Salzburg will transfer to the Met. Will audiences collapse in hysteria? Not if they know and care about the opera or about Wagner. Herheim focuses on Hans Sachs himself, as individual and artist, not the "public" displays of civic pride. This Meistersinger is exceptionally werktreue and perceptive. It engages with Wagner's ideas on creativity and the purpose of art.  Herheim deals with the true meaning of "die heil'ge deutsche Kunst" and with Wagner in the context of German tradition.

The Overture unfolds showing Sachs (Michael Volle) in nightcap and gown, surrounded by relics of his long dead family.  Herheim shows us Sachs the man who was once happy with a wife and children. Perhaps that's why he acts as father figure to others. But it also shows how "Wahn, Wahn, überall Wahn" grows from deep emotional scars. Life is short, and unfair. It shouldn't be wasted on things that don't really count. There's nothing silly about seeing Sachs playing with toys. This gives depth to Sachs's personality, and also connects to the idea that creativity is instinctive. References to youth and renewal run throughout the opera. The congregation in church are witnessing a baptism. Herheim's toys remind us to play with our imagination. Beckmesser thinks art comes from rigidly following rules. Sachs doesn't. Do we approach Herheim's Meistersinger as Beckmessers or as Sachs?

Throughout the opera, there are references to craftmanship and the process of creation. "Schuhmacherei und Poeterei", as David says.  Understanding Die Meistersinger von Nürnberg  as a work about art and the making of art can't surely be too difficult a concept to grasp. So there's no need to sneer when the set turns into a giant desk.  So the characters in the narrative spring to life on Sachs's workstation. The Meistersingers make much fuss about proper seating. Herheim has them sit on upturned giant thimbles, which are later revealed as empty buckets. When Walther (Marcus Werba) sings his first "Fanget an!", the Meistersingers collapse like skittles. It's funny but also very apt.

By defining the concept of art as imagination, Herheim is able to release much more esoteric levels. The imagery of sleep is important, too. By day, Sachs is busy making shoes. At night he's alone. Sleep releases the unconscious, creative mind. Sachs solves the dilemmas in his art as a craftsman, just as he fixes shoes so they function properly. In Act Two, the desk is shrouded in darkness. We catch a brief glimpse of the lilac tree through Sach's window, but we don't need to see it again on the desktop "stage". Its fragrance perfumes the music. Johannistag coincides with Mid Summer Night's Eve, the shortest night in the year when magical things can happen. When the townsfolk awake, they're literally surrounded by "Gespenstern und Spuk". Fairy tales, as Bruno Bettlelheim said, mask subconcious fears under a guise of comic figures. Ghosts and spooks would be hard to depict in a more literal staging. We laugh, but take the point. There's even a group of trolls! Herheim's wry sense of humour is deliciously wicked.

These images also bring together several periods of German culture. Herheim's costumes suggest the Early Romantic period, when German intellectuals like the Brothers Grimm, Brentano and von Arnim and Gottfried Herder were rediscovering premodern tradition. Without the Romantics, we might not have the modern world with its interest in the darker side of life, and in creative freedom. Nor would we have Richard Wagner. He knew very well what he was doing when he chose Sachs for his subject, since Sachs lived robustly in the Reformation, another important flowering period of German culture and identity. At Glyndebourne in 2011,  David McVicar's Die Meistersinger von Nürnberg (review here) was set in the period of Wagner's youth but to little effect. It romanticized without connecting to the savage spirit of the Romantiker.There's a huge difference. 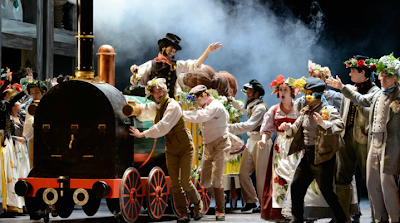 Herheim's staging is much more literate, and intelligently thought through. The Romantiker fascination with Nature was often seen through the prism of the drawing room, so Herheim's indoor setting is wittily ironic.Things seen through the imagination are often hyper real. When David sings of "der rote, blau' und grüne Ton" we see wild flowers held aloft. The final scene on the banks of the Pegnitz isn't shown literally. But there's a train! This isn't director whimsy. Without railways, industrialization and the rise of the middle class, modern Europe wouldn't have developed. Trains represent change, just as aristocratic Walther represents change when he joins the good folk of Nuremberg.

The townsfolk are draped in flowers: if these were real their scent would fill the hall. The women wear white aprons, so dazzlingly bright they light the stage. Herheim's having a merry little dig at the idea that costumes "make" an opera. Although there's a lot of detail to reward repeated viewings, the visuals aren't there for their own sake but to intensify the fundemental drama in the music. The critical moments, like the quintet and the Prize Song are shown with simple clarity. Those who hate modern productions on principle often claim that directors should "respect the work". But that argument can be turned completely on its head. A really good opera is strong enough to withstand multiple interpretations, and perceptive interpretations like Herheim's show us how much there is yet to discover. "Verachtet mir die Meister nicht, und ehrt mir ihre Kunst!". 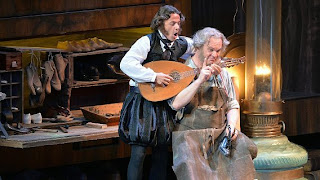 Michael Volle's Hans Sachs is excellent. It helps that he looks like the historic Sachs, and that he himself grew up in the Lutheran tradition. Volle gives the character grit and gravity, mixed with a genuinely warm humanity. Volle's diction highlights the couplets and phrasings so typical of German tradition. When  he sings "ehrt eure deutschen Meister! Dann bannt ihr gute Geister" he infuses the words with positive feelings, banishing  memories of wartime Bayreuth.

Markus Werba's Sixtus Beckmesser quivered with nervous energy. He sings with more colour and charm than we'd expect from Beckmesser, but that enhances his portrayal. Beckmesser's weak rather than evil. He wouldn't be a Meistersinger in the first place if he was incomptent. He just doesn't get it, that true art comes from being original. Werba makes the part sympathetic. This Beckmesser is deluded rather than a troll. Peter Sonn's David is delivered with strength and conviction. This David is no ingénu, and justifies his master's faith in him. Herheim's blocking of ensemble also shows how the apprentices connect to David.

Rather less rewarding were Roberto Saccà's Walther and Anna Gabler's Eva. Saccà's voice finally did him justice in the Prize Song but it was a little late. As for the orchestra ? What was Daniele Gatti doing? The pace kept slackening. Sachs is a cobbler, not a carpenter. Wooden playing like this just doesn't work. When Herheim's  Die Meistersinger von Nürnberg transfers to the Met, with a different cast and conductor, it should be a success.
at August 21, 2013

I have just seen the last three performances of Otto Schenk's masterful production of "Meistersinger" at the Metropolitan Opera. And soon it will be replaced by this perversion, this self-important piece of Eurotrash. Mr. Gelb chose it and it is just another step in the destruction the Met, something I predicted when he was hired.Alas!