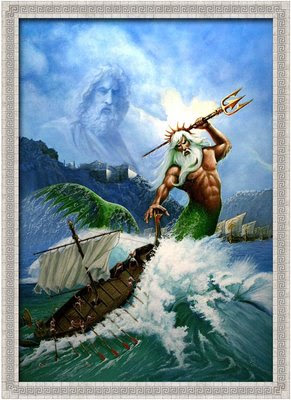 The ENO Mozart Idomeneo is a strange and wondrous beast, like something in a myth which defies logic. It's a schizoid creature of two parts, insufferably naff and spectacularly bright, at the same time. What's going on?

Idamante  meets his father Idomeneo on the beach,  just after being told the older man is dead. What, no shock? The words are there, but where's the emotion?  This is the basic premise of the entire opera, on which all else pivots.  Unless you already know Mozart or Greek myth, you'd be all at sea too. In this production that crucial scene is so underplayed it comes over as a meaningless, casual encounter. Is being saved from death so commonplace?  No menace, no mystery, no terrifying portent. The crucial thing in the opera is, what's the catch?

As a friend says, it's too fantastic to be real, so why the modern setting? But because all good art is universal, the "real" story in Mozart's Idomeneo is a moral dilemma. Idomeneo has traded away what he loves most to save himself, and must pay a terrible price. Greeks used Gods as symbols of powerful forces. Poseidon (Neptune in Italian), isn't real but what he stands for is very real indeed. Just not this time.

Beautiful opening: Expensive, golden luxury, a picture window opening onto a panorama of the sea. It's a good simile for Princess Ilia's predicament - trapped in a gilded cage. When the hordes of waiters and  functionaries wander around here, it works. For a while. But they don't stop., throughout nearly the whole opera. Less is more! Once the point is made, there's no point carrying on and on and on. When there is room for a crowd, when the Cretans mutiny, they're directed with genteel restraint. Just another set of waiters,  but in messy costumes, not peasants driven to revolution. No wonder Idomeneo is piqued rather than terrorized.

The airport scene's good because it breaks the plane across the stage into two compartments, which also represents the division between royal privilege and the masses. Wonderful thunder and lightning. We can all identify with this, if we've been in planes in a storm. Just how the Cretans felt in their little boats out on the ocean.

Note though, the constant intrusion of Nature onto this cosy, hermetically sealed world. Perhaps that is Katie Mitchell's point, that Idomeneo and Idamante live in an unnaturally sterile cocoon, denying Nature. But unless we feel the wild force of nature, we can't see what the fuss is about. That wild forcefulness is in the music, well conducted by Edward Gardner. That's where the production should be taking its cue.

Ilia is crucial to the plot, not just as love interest biut because she's the Trojan prisoner who springs Idamante and Idomeneo from their claustrophobia. But note Illia's big aria, "Friendly solitude, amorous breezes" . It's about the sea, freedom, clean air. Perhaps Mitchell's making a point by staging it inside an underground bunker, where nature appears in fuzzy images on a slide projector. But it would be simpler and more effective to depict nature in other ways. For example, take the idea of "rooms" used in the airport scene (and the panorama windows). Perhaps Ilia could be in a small box side stage, on a terrace, overlooking the sea? That's where Poseidon lives, where the death pact happened.

Paul Nilon and Robert Murray were good singers, but didn't act, or more accurately, were not called upon to act. They're stupefied, drained of life by the make-work busy-ness around them. Nor are they all that well defined other than by their voices : Murray's bigger and has more physical presence than Nilon. Give him a crown, to even things out! Sarah Tynan's Ilia is sweet, a little sharp at the top, but that's in character. Not much the production can do to submerge her.

The stroke of genius in this production is Elettra, wonderfully created by Emma Bell. Voluptuous, sexy, temperamental, wanton - she's a rebel, too, chafing at the unnatural atmosphere in this palace, but, twisted, she turns to drink and kinky sex. It's a very realistic, believable characterization and develops the narrative well. Bell is amazing, great panache, intense vocal colour. Unfortunately, the rest of the production didn't quite live up to the level of this characterization.

Even before the start of the run, there was a lot of negative publicity, which wasn't constructive. This isn't a pop-Mozart , so it deserved better. So there are silly things in it but there have been far worse travesties. And there are also some very good things indeed.  Definitely not a boring evening. I'd gladly go again to a revival where they tighten up the drama.  Please also see my rant on the use of crowds at the ENO. Mitchell's not the only perpetrator. Please also see my other posts on Idomeneo and on the Drottningholm Idomeneo from 30 years ago which this ENO version resembles, oddly enough. That gives me hpope that, with amendments, Katie Mitche3ll could make something ofb this production next time round.
at July 08, 2010