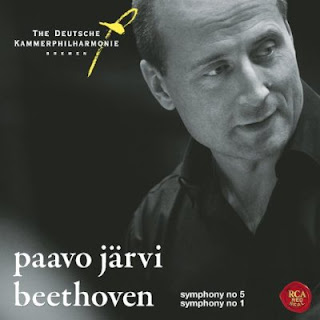 When it comes to Beethoven's Fifth, I turn to jelly. It's so wonderful that even school  bands sound good. So when an outstanding performance comes up, I melt in ecstasy.

What a vivid sound the DKB give Järvi! Such sharpness of attack, such energy, such brightness.  Gone the accretions of performance tradition which may or may not reflect Beethoven. Instead, the music feels like it's flying straight off the manuscript, clean and vigorous. It "lives". You half expect the composer to turn up and take a bow.

The period instrument ethos definitely helps. Natural horns may not be as sophisticated as late 19th century improvements, but they're brighter, more human in many ways. Textures are lighter, but they move. When Beethoven could still hear, that's what he might have heard.

Authentic in itself means nothing, though. Järvi and his orchestra make their Beethoven 5 sound right because they access the spirit of the symphony. This is Beethoven in full flow, glorying in the joy of creation.. What freedom, what clarity!  200 years after it was written, it's still  AUDACIOUS.

After hearing the Fifth,  listening again to Järvi and the orchestra do Beethoven 1 enhances the experience. It connects to the 5th, so brave, so assertive. And then, Hilary Hahn plays the Violin Concerto in D major. She's on the DKB vibe, too, wonderful.

And as a bonus, an encore!  The Allegretto Scherzando from Beethoven 8.

But listen to the broadcast online, on demand and all over the world until next week. Highly recommended.Get the recording,too, though it's not quite the same.

Best Prom so far in an illustrious season. Of course, my weakness is period-sensitive orchestras and their agile sound. My next best was Petrenko Schumann, Rachmaninov and Tchaikovsky, Prom 4. So far this season only 3 duds of sixteen (two I haven't written about and one stinker coming up I won't listen to). PS I have been wonderstruck by Paul Lewis's Beethoven, especially Piano Concerto no 2 on 29th (Prom 16) and 4 on 21st (Prom 6).  I don't usually write unless I have something original to say, and it's pretty obvious, everyone swoons for Paul Lewis. And Andris Nelsons, who is brilliant.
at July 28, 2010