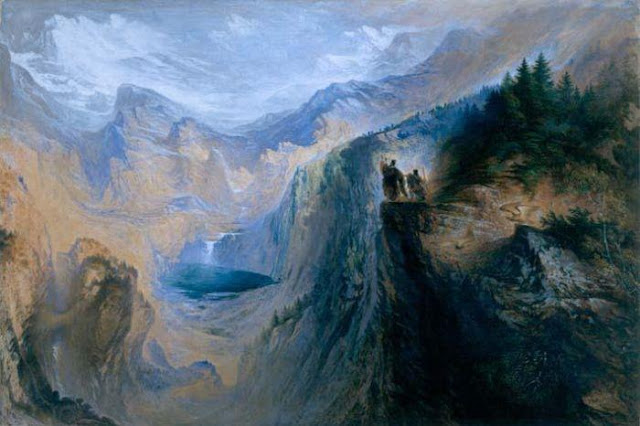 Manfred x 2 at Prom 4: excellent idea, programming Schumann's Manfred Overture  with Tchaikovsky's Manfred Symphony, one amplifying the other. Amplification is the right word because the hero /anti hero Manfred swings between extremes, sees visions of the supernatural, hears voices from nowhere, and has religious delusions. Manfred is the ultimate Romantic hero/anti-hero, regardless of whether Lord Byron created him in his own image.

Romanticism was a revolt against the Age of Reason. Instead of classical elegance, extreme distortions, and obsession with the macabre. Nowadays we'd pin psychiatric labels on many Romantic heroes, but in the early 19th century they represented a revolutionary breaking away from earlier ways of thinking. Instead of Absolute Monarchs, the idea of the Individual making his own rules. Romanticism unleashed the subconscious and electrified European literature, art, philosophy and music.

Robert Schumann doesn't get the respect he's due because the impact of Romanticism isn't fully appreciated. Because he ended up "mad", his later work has been minimized. Yet in many ways, late Schumann is interesting because he's breaking away, experimenting with new forms of expression.

Growing up in Leipzig, Schumann was uncommonly literary.  John  Daverio

, the most intuitive of Schumann scholars, felt that text was integral to the music far more deeply than in the sense of word-painting. Schumann liked the shape of syntax, the rhythms of declamation.  Schumann's music drama is "difficult" if we expect it to evolve like Meyerbeer, or even Wagner, with conventional narrative. Instead, it's closer to abstract, conceptual art. Das Paradies und die Peri is pretty much established now, and Genoveva received a major performance in Paris last year (Please read my 2 posts on Genoveva HERE and HERE) Perhaps it's time for a revival of the full Manfred.

On the strength of this performance, it could work, given playing as passionate as Vassily Petrenko raised from the Royal Liverpool Philharmonic Orchestra. Romantic music is full of sprites, fairies, witches and mystery Abbots, so Manfred really isn't unusual per se. Think Peer Gynt who travels from Norway to Africa, or The Wolf's Glen in Der Freischütz.  No need for realism. Besides, nowadays we have film. Late Schumann has a lot to offer the 21st century. (Read Daverio on "Schumann's New Way" and on Music drama.)

Petrenko and the RLPO were even better in Tchaikovsky's Manfred Symphony, which was so good I'm staying up to hear it again on rebroadcast later tonight. Extremely vivid, dramatic, intense. The manic extremes don't endear this symphony to those who think of Tchaik as Nutcracker, but for cussed, curséd souls like me, it's thrilling. A rollercoaster ride emotionally, without the danger of having to "live" such extremes. 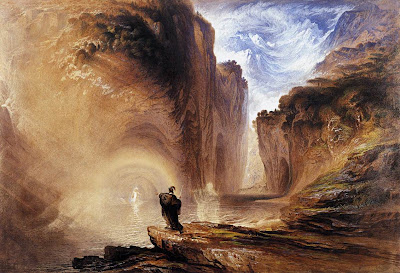 The  two paintings are by John Martin, an English Academician, who lived at the same time as Schumann. Note the swirling, circular thrusts of the lines, reality dissolving into abstraction. T he first is where Manfred ascends the Jungfrau and teeters on a precipice, terrifying the chamois hunting peasant. Look how the mountains curve inwards, unnaturally, and blend with the clouds. Lakes as deep and  psychedelic as that?

And right, the Witch appears in an equally surreal Romantic landscape, also with circular light. The spirits appear as images of light. Caspar David Friedrich's Romanticism is completely different: Martin connects to Turner, and the Impressionists to come.  (Click images to enlarge)

In between the two Manfreds, Simon Trpčeski played Rachmaninov Piano Concerto No 2. Wonderful, free playing. "I get the feeling, it doesn't matter the exact notes in live performance," he says.. This man's a true musician.  Pity about other commentary, though.  The BBC needs to dumb down a bit to reach mass audiences, but to assume we can't relate to Rachmaninov without thinking of movie theme tunes is plain stupid. Maybe for some, but we're not all morons.
Please see the beautifully written review by Richard Landau HERE.
Listen to the repeat broadcast HERE and HERE
at July 19, 2010