The Prince of Homburg Kleist Henze 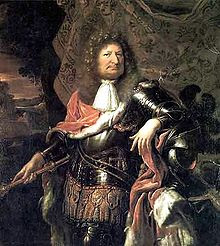 A new production of The Prince of Homburg by Heinrich von Kleist opened yesterday at The Donmar in London.  The Prince of Homburg is a psychodrama, but completed in 1810, long  before the language of dreams had a vocabulary. It deals with moral issues like honour, duty, betrayal and the very idea of goodness in a mad world.

It's 1675, and North Germany has been invaded by Sweden. On the battlefield at Fehrbellin, it seems at first that the Grand Elector of Brandenburg has been killed, riding heroically into the heart of the battle. Inspired by this image, the young Prince of Homburg seizes the initiative which decisively changes near defeat into decisive victory.  As in battle, in life, sudden cataclysmic changes. Because he disobeyed orders to stay put, the Prince is court-martialled and sentenced to death. The play is about how he deals with the crazy situation he's in.

The Prince of Homburg is a fascinating story which operates on many different levels. It's been produced many times, in many countries, and is the subject of several movies. I vaguely remember an earlyish German black and white movie, but not much else about it. The best and most readily available film is Marco Bellochio's ll principe di Homburg. (1997) Although it's in Italian, it's very atmospheric, tautly directed and acted, so it feels like you're trapped in the Brandenburg marches, in savage wartime conditions. War is irrational, which is why the Elector is so harsh on the young prince.

Hans Werner Henze's opera Der Prinz von Homburg (1960) has been performed many times, though there is only one full recording, the DVD of the .Bayerische Staatsoper production of 1994. Wolfgang Sawallisch conducts, and the French baritone Francois Le Roux sings the Prince. Musically it's OK, though one could imagine something more intense and gritty. Henze cloaks his dramas in beguiling elegance, but at heart they're startlingly sharp. Nikolas Lenhoff directs, with designs by Gottfried Pilz. Achingly brightly lit, which is perhaps not a bad idea, given that the Prince is "under interrogation" but there's more to than Andy Warhol outlines. I  prefer the shadows of the Bellochio film, where you can feel the poison seeping, ,like miasma rising from the marsh. 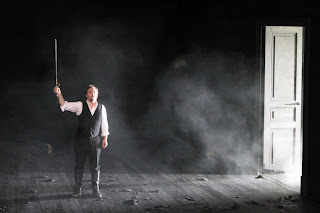 In 2009, there was another major new production of Henze's Der Prinz von Homburg, at the Theatre an der Wien in Vienna, which specializes in intelligent and musically-informed. Marc Albrecht conducted the Vienna Symphony Orchestra, and singers included Christian Gerhaher as the Prince, Britta Stallmeister as Nathalie, to whom Henze and Ingeborg Bachmann, his librettist, gave a much bigger part than von Kleist did.

Hard to judge by photos alone, but it looks as good as the cast. Larry Lash in Opera News says "Christof Loy conjures a dream world, a telescoping wooden box that goes from charcoal gray to infinite pitch-black designed by Dirk Becker. The opera begins in white period costumes by Herbert Murauer, with the singers' faces powdered, but it gradually moves to late 1950s street clothes. Bernd Purkrabek's lighting is miraculous: by framing the proscenium with strips of bright white light, he makes it possible to change the entire stage picture in a matter of seconds. Loy takes a pessimistic view of the denouement: the Prince chases everyone offstage and, as in one of his premonitions, plummets into his grave in a startling coup de théâtre."

Another description, in German Der Blick ins Grab der Erkenntnis (a Glimpse into the Grave of Knowing by Roberto Becker. More photos by Wilfried Hösl on this link - I've borrowed one under "fair use" conditions.

And the Donmar production, using an English adaptation? Strictly speaking I cannot say, because I was in a seat without any legroom and was forced to leave in the interval. Don't Health and Safety Regulations apply? I can't have been the first to suffer and won't be the last. The Donmar really should take this more seriously.  Nonetheless, it was a decent production even if it didn't reach the many deeper levels in the drama. Updating to Jane Austen times prettified what isn't a pretty drama. Uniforms don't necessarily depict war : the war in the Prince's mind goes deeper.

Maybe it's just as well I didn't stay. They changed the ending ! Guardian theatre critics at least, seem on the ball, read Michael Billington. He realizes that Kleist wasn't writing TV costume drama.


Interesting biographical note on Heinrich von Kleist (from Joachim Maass, trans 1983)  Kleist was a blackish sheep from a noble clan, one of whom was Fieldmarshal Ewald von Kleist (1881-1954) who must have known similar dilemmas of duty given who his Leader of Staff was. The von Kleists weren't too happy about Heinrich's death site on the Wannsee becoming a tourist spot.
at July 23, 2010