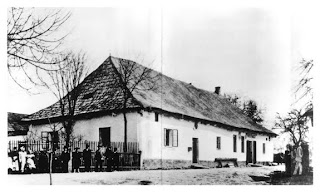 Mahler left Kalište when he was only six months old, so he didn't have any real connections with his birthplace. But 150 years later, Kalište hosted a big gala celebration. Thomas Hampson and Wolfram Reiger gave a song recital in a tiny performance room in the renovated farmhouse. As he quips to the audience "We're sitting where Mahler slept". Mahler in diapers, that's a thought. Bet he cried a lot. Weh! O Weh!

The broadcast is now available on Medici TV. Hampson starts cautiously. He struggles with the high passages and visibly beams with relief when he traverses them, but don't worry, after the first few songs, he's fine. I think the July heat must have been oppressive, and it's a small  room, lit by arc lights for TV. You can see Hampson sweat and drink a lot of water. Such things affect voice, so no discredit to him.

He manages Das himmlische Leben Mahler 4/IV) fine, even though it was written for high soprano . Transposed down for piano song it works well as Lieder. He pairs it with Das irdische Leben, too, so the connection's clear. But this wasn't any ordinary recital because it was at Kalište. Look see who's in the audience!  Hampson of course is inner-circle Mahler because he's contributed so much to Mahler scholarship and performance.

Get his DVD Voices of Our Time - exceptionally good commentary by Hampson, who shows how Der Tambourg'sell and other war songs speak to a world that's seen the invasion of Iraq and the suppression of civil liberties. It's a classic introduction to Lieder as well as to Mahler song.

Later that evening Manfred Hineck led the Gustav Mahler Chamber Orchestra in an open air concert which featured Totenfeier and the finale of Mahler Second, plus a selection of songs with Hampson, Ann Sofie von Otter and Marita Selberg. (that's not on TV)

For a hundred years after Mahler left, Kalište didn't mark him. Indeed, the original building burned down twice. About 15 years ago, a brass plaque was placed on the wall.  However, sacred sites have commercial potential, and the place was renovated into a hotel resort. The Mahler moved out, now tourists can move in. As the publicity says "Now you can wake to birdsong, just like Maher did".
at July 30, 2010