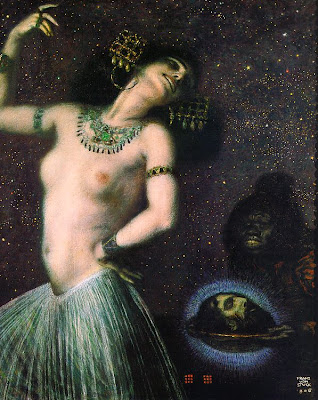 In principle, the idea of Salome as victim of child abuse is perfectly reasonable. Herod and Herodias were not nice people (and were uncle and niece, moreover - they "kept it in the family")

The pictures here are by Franz von Stuck, leader of the pioneering Munich Secession that started ten years before the Vienna Secession. Stuck lived in a bizarre palace he designed himself, filled with creepy painting and objects. Art nouveau and decadence are closely related.

So why was I so disappointed in David McVicar's production at the Royal Opera House? Nowadays nudity doesn't shock so there's no reason why Salome's Dance of the Seven Veils needs to be "exotic" per se. But McVicar redirects the emphasis, instead,  to the physical mechanics of stagecraft, so Salome herself becomes largely irrelevant among the props..

Massive, complicated machinery which moves across the stage, overwhelming all else. The action's heavy handed, too. Isn't it obvious when Salome sits with a toy on Herod's knee ? And what's the point of the wardrobe of dresses and so on?  The most effective part of the whole opera was when Salome was simply left to dance, a golden filigree object projected on the wall behind her.

If the drama iasabout Salome, and not the machinery, why is she such a cipher? I don't think the fault lies with Angela Denoke, who sings well, but doesn't convey any of the complexity of Salome's character. Sure, she holds Jokanaan's head between her legs, and blood flows from her private parts rather than from what's left of him, but it's curiously sedate.  Salome-as-psychological-Chernobyl needs to be directed more tightly, and take over the stage, by the intensity of her performance. Denoke's good, but it would take a very unusual person to pull this off.  Salome's like Lulu, child-like outside, volcano within.

It also doesn't help that Denoke has to compete with a railway station full of extras. So it's a palace? We don't need to see so many maids and factotums, standing around, contributing little, that's not all what palaces are. What's the point of the naked girl, or rather, girl in body suit ?  Or the upstairs dining room? We know palaces have dungeons below. So why ? The banquet background of Christof Loy's Tristan und Isolde emphasized the political horse trading that created the situation in the first place.  McVicar's  banquet's just there, it does nothing after having made its point in the first two seconds. Nice staircase, though.

Strauss's groups operate in blocks - holy men for pressure, soldiers for menace. But when they're spread all over, and not defined by action (as opposed to costume) the impact is diffused. Compare Laurent Pelly's use of groups in Manon, concentrated and operating as a unit.  It's these pressures that pile up on Herod, forcing him into a quandary. Though you'd need to know the opera (or Wilde, or the Bible) because it's hardly noticeable in this production.  The story entered the Bible because it's a conflict between Jews and Nazarenes, old authority versus new. A few prayer shawls don't make formidable opposition.

Without conflicts pulling Herod apart, he's neutered, too. Gerhard Seigel's performance is masterful,. He paces himself with steady authority, nice, resonant lower register. As a king, he's totally believable. But as child molester?  Curiously unconnected to Salome for good or ill. As for Jokanaan, one of the reasons Salome wants his head is because he's wild, completely different to the world in the palace. Johan Reuter's improved lots over the years, but hasn't much chance to stand out in this circus of a production.

Fundamentally, singers sing. Acting is where directors come in, to motivate and develop.

Meanwhile, Richard Strauss's music whips itself into neurotic frenzy, exuding unsettling, poisoned perfumes. This music is so thrilling it survives the production. Hartmut Haenchen's experience in modern German repertoire makes his Strauss disturbing, shaping colours languidly, legato curling like a snake. This was excellent playing, and made the evening worthwhile. A good musical experience, good singing all round, even the cameos.

Pity, though, the singers weren't stretched as actors. Irina Mishura has the vocal potential to do more, but here she's merely the inhabitant of a green dress.  Andrew Staples's Nabbaroth is sung with such assurance, you wish more was made of him. And it's worrying when all eyes are on a non-singing part, the naked executioner. Why he's naked I don't know, but he's great to look at. The trouble is, it's Salome we should be looking at, because it's really her show.

two little jokes sent to me :

"How did they tease Haenchen when he was in school ? Cluck, cluck, where the eggs ?

And a video of a play written for schools in Ghana where the kids are more enthusiastic technically perfect,m and are acting in a language not their own :
"Bring me the head of John the Bapti"
"My daughter, ask for something better" (lists alternatives)