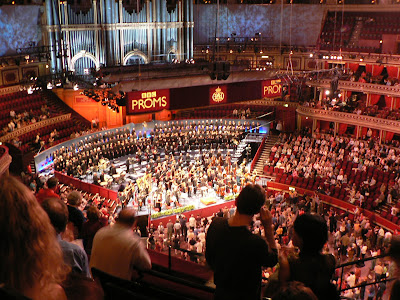 Could there be a more spectacular First Night of the Proms 2010 than Mahler's 8th Symphony? Mahler doesn't mess about.The very first bars explode. It's the mighty Royal Albert Hall Willis organ with its 9997 pipes and 120 stops. No other concert hall comes close: The Royal Albert Hall was made for moments of mega-theatre like this.

Mahler's Eighth Symphony is Big Bang, a moment of cosmic illumination that shocks and awes. The energy, in Mahler's case, comes from the invigorating power of love and creative art, so overwhelming that it blitzes all trivia.  Artistically, by far the finest Mahler Symphony no 8 I ever heard was in the Philharmonie in Berlin. Read about it HERE  Utterly brilliant musical experience.

The BBC Symphony Orchestra aren't remotely near that mega-league, but this Prom worked well simply because it was The First Night of the Proms, the beginning of a brand new season. What a sense of occasion! What excitement!  This performance was audience participation in the best sense, thousands of people listening intently, willing themselves to be caught up in the moment. It's not "just"  music, but the hope of creative rejuvenation. That's WHY "Veni veni Creator Spiritus".

When Jiří Bělohlávek was first hired as the BBC's top conductor, many were surprised because he didn't have a high profile like many starrier conductors. But he had a formidable reputation for Czech repertoire. Indeed, he's transformed the whole way the genre is heard, for his style is so fresh and distinctive. But he doesn't milk publicity and play to the media. Because he's unassuming, many don't realize just how much he's achieved. Other conductors may get more fuss made of them, but Bělohlávek  is exceptionally good. Oddly enough, he's never quite had the measure of Mahler, so I didn't know what to expect.

But Bělohlávek surpassed himself.  His secret wasn't to listen for the Czech in Mahler, but to Mahler's shocking, apocalyptic message.  Just keeping orchestral and choral forces like this together is an achievement for any conductor, but Bělohlávek  has them all on message.. No missed entries, no loosening of tempi, but everything hurtling forward as it should. There were sour moments from some sections of the orchestra, and some disappointing singing among the soloists, but Mahler's 8th is greater than the sum of its parts, and Bělohlávek knows it.

This was music as theatre, in the perfect setting.  Last time I heard Mahler 8 at the Royal Albert Hall (Daniele Gatti) . I was sitting second tier up, in the middle, but right at the opposite end, an ideal spot for this symphony where you need to hear the "whole impact" not just the elements. This time I was up in the circle, excellent for hearing the choruses. It was interesting because you could hear the slightly different styles you get when you have 6 different choirs. One was less polished than the others and tended to drift, but Bělohlávek reined them in gently. The message of this symphony is, after all, that no-one needs to be perfect if they love.

Bělohlávek didn't define the individual developments in the piece specially cleanly, but found a lyrical ambiance that worked fine: every conductor, every listener has a different point of view.  Because this is Mahler anniversary year, there are a lot of performances coming up (including the Proms), which will be truly  grotesque. Bělohlávek isn't ideal but he's infinitely better than many. Be grateful, for what is to come will be much worse. This Prom will probably be the highlight of the entire year, be cause it accessed the drama inherent in the music, without distorting from its tenderness.

Bělohlávek  understood  the slow movement at the beginning of the Second Part. This section is like what Catholics call "Limbo" a state between life and death, before judgement. So, cymbals brushed together so quietly that they sounded like dry, hollow echoes,. If sometimes. the brass sounded a mite sour, in this context, it wasn't wrong.

From where I was sitting, most, but not all, of the singers didn't impress. Perhaps when I listen to the recording  (available on demand for 7 days)  things may sound better. But another curious paradox of Mahler 8 is that the voices aren't all that important. They're just instruments among many others, they are not singing "roles" as you'd expect in an opera. They're more like raised bas-relief than separate statues, to use sculpture terms.Often people coming new to Mahler think he's "operatic" but the deeper they go into the music, the sooner they discard the idea. Whole chapters could be written about why Mahler didn't write operas, too much to write now. But look at the section in Henry-Louis de La Grange's Vol 4 biography for starters.

Oh, and ignore that "Symphony of a Thousand" tag. It wasn't Mahler's idea but dreamed up by a publicist. Listen carefully, and the symphony reveals itself as the spiritual journey of one man, and the muse who makes his life worth living. For Mahler, fundamentally, it's not at all "a symphony of a thousand".

This Prom was also televised - watch and listen now, for 7 days. This was such a great First Night of the Proms it will probably be repeated, but don't miss out. Please keep reading this site if you like commentary that's processed by a human mind.  No generic bland, no recycled programme notes here! Mahler is perhaps my main man, please see other posts.  Mahler at the BBC Proms this year won't be that remarkable: Bělohlávek Mahler 8 is the keynote and probably will remain the highlight.
at July 17, 2010

Enjoy your comments. I'm listening to the M8 recording from the Proms right now, most of the choral work is top notch. I agree about the singers, especially the men. Too bad, but I also agree the conductor has the measure of the piece and I expect the ending to be the usual knockout.

Good evening Anne
Thank you so much for the link to the broadcast. It is so far from the days whe the proms would be heard in Short Band on BBC Worldwide. Thank you for the sharing. There should be a Mahler for those thousand bloggers who make a place for the dull and numb to taste music. Am coming from a extraordinary concert in Mauritius, a Lithuanian soprano giving Lieder and Song (not just Schubert and Schumann but Berg, Schoenberg and Rachmaninov!) — a hint of wordness wonder. And the second part was.. Opera. No you dont applaud the same. But applause is life too, it changes like M8 part 1 and part 2 ! The Liederabend was as if the composer was a doctor who put you spectacles (the music) for you to read a little and feel more — this must be like Ghazal for those who did the step. A hint of that wonderful art that you hint so well to. Laudate! I dont really deserve it. But you do.
This M8 what a torrent!

Someone told me tonight, that is was only the second Mahler 8 Belohlavek has ever conducted. The first was 30 years ago. So he didn't do too bad - I have heard much worse !