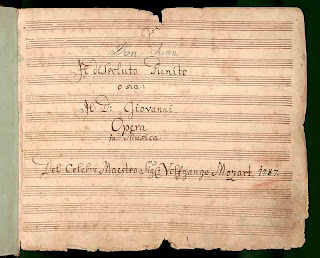 Jonathan Kent and set designer Paul Brown created the astounding Purcell Fairy Queen at Glyndebourne in 2009, so there was no chance this new production of Don Giovanni at Glyndebourne would be dull. Think about who Don Giovanni is. He's always one step ahead, adapting and changing, always on the move. Kent and Brown take their cue from the opera and its music.

As we sat waiting for the performance to start, the theatre at Glyndebourne was suddenly plunged into total darkness. A power cut? No, this was theatre, in every sense. Gradually golden light picks out the orchestra. It's a beautiful image, burnished instruments, musicians moving as in a ballet. Immediately, attention is focused on the music, as it should be.

The Orchestra of the Age of Enlightenment is one of the finest period orchestras in Europe. Historically-informed performance is valuable in Don Giovanni, not because it's authentic whatever that might be, but because it creates lighter textures, reflecting the elegant, flexible movement in the music.

Then, instead of a conventional set, there's a giant rotating cube, a square globe, so to speak, which contains "the world". It unfolds, reshaping and reinventing itself: a box of tricks, like Don Giovanni himself. Because it's meticulously designed the cube moves quickly and silently. it's much less intrusive than conventional set changes. Major transformations take place during the interludes, so they don't get in the way. This amazing set frees the action from technical limitations. allowing the drama to unfold, rapid-fire and free.

At first the cube reveals its secrets slowly. A crack appears: it's a narrow alleyway. Don Giovanni is trapped like a rat, so he lashes out and kills the Commendatore..The cube closes again, its outer walls like a stone building. Later, the cube opens to reveal a sunlit garden, complete with trees. It's the peasant wedding. So many shifts of focus. Garden transforms to ballroom, Zerlina's loyalties shift, the masked visitors move in on Don Giovanni.

Conflagration ends the First Act. While the crowd converge on Don Giovann, Don Ottavio points at objects, just like the Commendatore will later point at Don Giovanni. For now, it's just the furniture that goes up in flames. Real flames, you can smell the gas. It feels dangerous, even though you know Glyndebourne (and its insurers) have checked it all out thoroughly. We know Don Giovanni will end up in hell, but seeing him circled by fire is dramatic. It's entirely consistent with the turbulent music with which Mozart marks the beginning of Don Giovanni's end.

In the Second Act, the giant cube is transformed, as if it's exploded. Don Giovanni's clever stratagems are beginning to shatter. Instead of neat panels, wild diagonal planes, sharp angles, knife edges, if you will. Violence implicit. The pace quickens, the orchestral playing with great agility. Some of the best singing all evening, too, the cast invigorated. Movement is well blocked, the cast nimbly negotiating the change of position (and costume).

Perched dangerously on the central diagonal plane, Gerald Finley (Don Giovanni) and Luca Pisaroni (Leporello) read the inscription on the Commendatore's grave. No statue as such, but by this point in the performance the atmosphere of horror is so intense that a device like a talking statue would seem clumsy. As Finley teeters on the dangerous ledge, and Pisaroni cowers in terror, the Commendatore's voice booms out. Invisible threats are much more frightening.

A golden candelabra on a luxurious table cloth. Don Giovanni's showing off, trying to impress.  But the table's on the spot that was the grave. Suddenly,the Commendatore pops up, a corpse in a rotting, blood-stained shroud. Death levels all, rich or poor.  The corpse topples the table over, exposing its flimsy structure. Slowly, the corpse moves towards Don Giovanni and zaps him dead. Everyone gasps. A fantastic coup-de-théâtre!

It's an overpowering image. Thank goodness for the final chorus Questo è il fin, where order is restored, and we're reminded that theatre is glorious illusion.

Magnificent as the set is, this will also be a Don Giovanni to listen to audio only,  for the orchestra. The Orchestra of the Age of Enlightenment are so good that they can generate almost demonic energy from the lighter timbres of period instruments. Vladimir Jurowski has rarely sounded more inspired, his tendency towards mysticism countered by the brightness of this playing. The music in the ballroom scene was particularly well defined. Trios move throughout this music, so defining the tripartite form in this orchestration is important.

Excellent flow between ensemble and soloists. Musicians of this calibre really make a difference This lutenist sounds truly seductive, and the harpsichord's spiky interjections signal alertness, because there's such sharpness of attack.

Gerald Finley's Don Giovanni is smooth, even a little soft-grained to start with, but then he's playing a man who achieves his aims by charm. His champagne aria, Fin ch'han dal vino, didn't fizzle but perhaps that's a hint that Don Giovanni's pursuit of pleasure is ultimately hollow. When Don Giovanni's trapped, he's most lethal. In the Second Act, Finley's voice darkens malevolently, yet he also manages to express the vulnerability in Don Giovanni's character. Does he really enjoy seduction, or is it obsession? Perhaps women are attracted because they sense that need in him.

But the operas isn't Don Giovanni's alone. Luca Pisaroni's Leporello made the dynamic between master and servant powerfully pungent. At Glyndebourne, you sometimes can't tell patrons from waiters, they're all in the same uniform, which adds extra piquancy to Mozart's subversion.

The interaction between Finley and Pisaroni is very carefully timed, superb vocal rapport. Pisaroni's Leporello is no put-upon fool, he pulls the strings. Very muscular, assertive singing, masterful in every way. At the end, Pisaroni's Leporello takes a photo of his master's corpse. Does he, too, have a "stud book" of past conquests?

The friend with whom I attended this performance has heard Cesare Siepi, Elizabeth Schwarzkopf and many others in this opera, but he doesn't judge singers in isolation as if they were lab specimens. Context matters, too. "These female singers are more like real women", he said, "not divas doing a role". It's a generous comment, as Kate Royal's Donna Elvira is just too big for her, and Anna Samuil's Donna Anna, though good in general, won't go down in history. Though, given the performance history of this opera, that's a tall order.

Anna Virovlansky’s Zerlina stood out, vocally firm and bright, physically vivacious and energetic..There she is, up against a wall with Don Giovanni, eagerly co-operating. Confronted by Masetto (Guido Loconsolo) she begs him to beat her. Virovlansky makes it sound wildly kinky, hinting at the darker aspects of Zerlina's personality.

.http://www.operatoday.com/content/2010/07/glyndebourne_do.php
ADDENDUM : The film version shown on BBCTV (and presumably the DVD) is completely different to the live performance  Lots of closeups, which are good but very little wider angle shots, so you don't get a sense of the  quick changer movement that we saw live. Pity, as that movement reflects Don G, a quick-change artists who can swap personality like he swaps clothes. That's how he charms! He survives because he's always been one step of the game, quick witted and chameleon like.  Don G is motivated by Liberta, the need always to be free of any kind of entanglement, so when the net closes in, he doesn't care anymore. On the film, all close angles, tight spaces, darkness, no contrasts of brightness. Also you don't see how scary the angles on the set are, which is part of meaning.  Singing wise, the film was well miked so Finley and Kate Royal come over much better. It's still a big part for her  as she doesn't quite have the emotional range. Close ups and good angles helped immeasurably. Pisaroni as Leporello, though, is even better close up than live - fabulous singing, natural, animated, and a stage animal too. (He's Thomas Hampson's son-in-law). Don't judge this production by the film. They're so different you need to catch a revival.
at July 12, 2010

Email ThisBlogThis!Share to TwitterShare to FacebookShare to Pinterest
Labels: Finley Gerald, glyndebourne, Jurowski, Mozart, Orchestra of the Age of Enlightenment