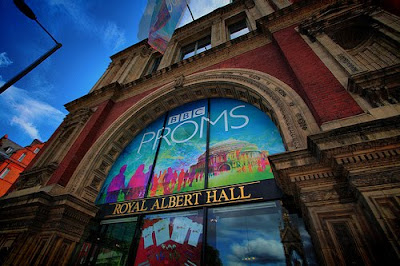 It's that silly season again - the BBC Proms 2010 start Friday. A whole  summer ahead, 90 or so concerts, live, online and broadcast all over the world. Easily the hugest, massivest music festival in the world. The world's Biggest Block Party, where everyone can join in, all over the world, as long as they have net and radio connections. Which means some guy in Outer Mongolia, Tuvalu or Peoria will be able to join in, courtesy of the British taxpayer. This is a much better use of public money than bombs, threats and guns. Cheaper and longer lasting than the Ministry of Defence.

One of the most worrying things about the future of  classical music is the way it's becoming insular, dominated by anglophone media. It doesn't reflect what's really happening in the world. Although the Proms are presented in English, they help break the anglophone stranglehold. The music is universal.

Which is why the BBC Proms are NOT like any other music festival.  No pretentious tossers here, pretending to follow with a score. Following Ferneyhough might make sense, but those clever types are usually following something like Carmen, looking for things to object to. While the rest of us are having fun paying attention to the music. Not that the BBC Proms are Beckmesser-free.  For some people the whole point is to get off on misery, but let's not waste time on them.

Another revered Proms tradition is finding fault. Usual ritual rants: not enough women composers, too much "new" music like that dangerous Stravinsky. My beef is embarrassingly incompetent presenters. Of course the Proms aren't perfect. But think of the sheer logistics of organizing a series like this, which features many of the biggest names in the business, and orchestras from all round the world. Impossible to get everything right all the time.  The fun of the Proms is that it stumbles on regardless and somehow pleases most of the people most of the time, which is more than can be said for many things.

Silly season - but it's good because people relax and let their hair down. Or up, if you're a woman and it's hot. Because it gets very hot indeed in that Victorian dome. Plus 6000 people emanating body heat. Just be glad that we're not Victorians. Nowadays people shower, wear loose (washed) clothes and use deodorants. Victorians didn't.

And if it's not baking, it's storm conditions. Which are OK, except when the queue snakes round the block for hours beforehand. This weekend, with three blockbusters in a row, those queues are going to happen.  Which connects to another Proms custom, the Bivouac.

If we're going to camp out, we'll do it in style, complete with fold up chairs, parasols, picnic baskets big enough to feed thousands! OTOH, the food is atrocious and over priced. Admittedly you can't make money with summer only restaurants, but all others in the vicinity are poor. And don't forget the fold up bikes, and near Last Night, the flags, banners and silly hats. Some of my friends wear DJs and evening gowns, but that's part of the fun, too, sort of ironic, post modern. Irreverence is a good thing!

Really Sacred Myth. The idea that those in the arena are somehow superior "real" fans. Some do go every single night and have been doing it for decades and a lot of this tribe really do know their music as well as the orchestras. In fact several are "in" orchestras when they're not in the arena. But the myth has snowballed and taken on a life of its own. No, going to every concert isn't necessarily a sign of knowledge. Sometimes it's OCD. And often, the best acoustic isn't down there, muffled by bodies.  So non-arenarees, don't feel intimidated  The arena is tremendous fun for many reasons, but  does not confer divine status

The Proms brings out an aspect of Englishness that is hard to describe. In the US it's known as Nerd. But affectionate nerd, for the most part. Although there are lots of silly "rules" like chanting, sitting in sacred spots, status issues, and death threats if you jump a queue, etc. there's also a noble purpose. The Proms raise huge funds for musical charities. It's not just for show. When you pop money into those buckets, it's appreciated. Dedicated counters stay up for hours, checking all is above board and the money goes where it's due. It's a serious business that deserves respect.

Yet how many Proms traditions are really as ancient as we think they are? That's one of the reasons why they're doing a recreation of a 1910 Prom, so we can experience the difference. Things don't always stay the same. We might even, one day,  be able to live with the Last Night exported to Wembley Stadium, its natural home.

Please see my pieces on the Proms in July,  and August and September.  I'll be writing lots, but not slavish churning out. I usually do about 40, only ones I can say something  original about. I have a life beyond the Proms!  Please come back, subscribe, bookmark.  And always, HAVE FUN!
Photo credit
at July 15, 2010