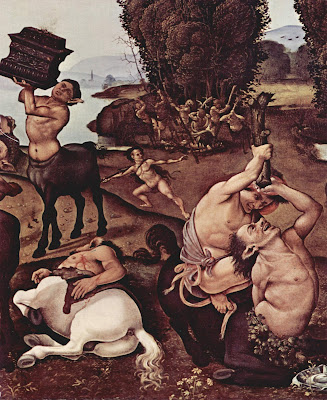 Simon Holt's new work Centauromachy will be premiered in Cardiff in November (BBC National Orchestra of Wales)  Big event, as Holt's music is dramatically vivid (see other posts on this site, like THIS).

"Centauromachy is a double concerto and takes the two opposing personalities of the mythical centaur as its starting point ", goes the press release. "The intricate internal structures of his works are concealed by a seemingly impulsive nature. During the 1980s he worked primarily in complex soundworlds, while since the 1990s, the dense textures have often been offset by Feldmanesque moments of calm, that Holt refers to as ‘still centres’."

Holt explains “Centauromachy (a double concerto for Clarinet in A and flugelhorn) is based on the idea of centaurs. Centaurs are a species of mythical creature that appear to have the torso of a man joined at the waist to the hind quarters of a horse at where the horse's head and neck would normally be. They are essentially fantastical beasts that combine, simultaneously, two distinct natures in one body. This may account for, on the one hand, their wisdom, making them intelligent teachers, whilst also making them impulsive and lustful, trapped in a kind of limbo between their two inherent natures: wild and yet capable of civilised behaviour. Chiron (who was the teacher of Achilles) is held as the superior of all centaurs and he features in a dreaming state in the second movement. Centaurs are well known for being heavy drinkers capable of violent and delinquent behaviour. Chiron, however, is highly intelligent and kind. There was once a battle between the Centaurs and the Lapiths and this battle features in the fourth movement. The piece ends with an Elegeia for Chiron, who died sacrificing himself in order that man may obtain the use of fire".


PLEASE SEE MY REVIEW OF THE PREMIERE HERE
Because this is a BBC commission, the concert will be broadcast nationally and internationally, and online, for all to hear. Thank God for "socialism", which is no more scary than the idea of providing public service for the benefit of all. Any Holt premiere is important because he's one of the great current British composers. PLENTY MORE ON SIMON HOLT on this site, please search.
(painting by Piero di Cosimo)
at July 14, 2010

Thank you for bringing this to our attention! A fascinating prospect...