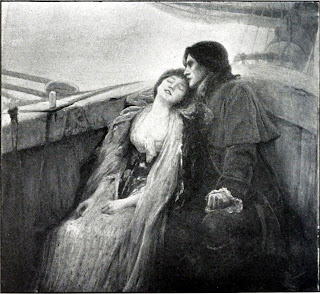 What a contrast between Strauss Salome and Massenet Manon at the Royal Opera House. Not the performances - both excellent, the singing in Manon exceptionally good. But the two productions are opposite case studies in how to present opera.

David McVicar's Salome takes one aspect of Salome and develops it to the exclusion of all others. Laurent Pelly's Manon takes its cue from the music and French style. Maybe there's more to look at in McVicar's Salome, but Pelly's Manon is much closer to the spirit of the opera. That, for me, is the crux of what makes a good production. It's nothing to do with period setting, abstraction, costumes, décor - only how the drama grows from the music.

Massenet's Manon is opéra-comique., which doesn't mean "comedy", but  lucid drama where the story's told through speech and action as well as from song.  So, it needs stylish acting, clear dialogue, classically direct set designs that elucidate the drama, not submerge it.  Laurent Pelly's direction and Chantal Thomas's set designs perfectly fit the elegance and clarity of the musical writing..

Manon stops for a moment in Amiens before being shipped off to a convent. So the town walls of Amiens loom above her. Not quite menacingly yet, for she's still (fairly) innocent.  Throughout the production, wide open spaces are contrasted with narrower constraints. This is true to the narrative, too. Thomas makes extremely good use of the whole space at the Royal Opera House, so the whole area reflects the opera..

At the Cours-la-Reine, sloping diagonals gently rise above the stage, so the crowd is spread out yet concentrated in clear lines of movement. At Saint-Sulpice, the church is depicted by a few huge pillars rising up into empty space, dwarfing the flimsy chairs below. This symbolizes the austerity of the church: simple, but powerful, its ideals rising above petty detail.  The priesthood means celibacy and poverty: the complete opposite of the life Manon has chosen. Misunderstand this scene and miss the meaning of the whole opera. When Manon snatches Des Grieux from his faith, she's doomed. It's far worse than being caught cheating at cards.

"Anna Netrebko is wonderful" , her understudy Simona Mihai (who sings Pousette) told me in a recent interview. (It's delightful, do read it.). She's right: Netrebko positively radiates the part. We know Manon is wild - or she wouldn't be shipped off to a convent - but Netrebko shows her goodness too. She makes Manon's love for Des Grieux seem genuine, if shallow. Again, set reflects drama. The apartment is a ramshackle structure, up rickety flights of stairs, as fragile as the relationship between the lovers. When there's a knock on the door, Netrebko shrinks back. She steps gingerly because she knows there's a steep drop behind her so she needs to find a strategically placed bar for safety. .Again, physical action expressing the plot. De Brétigny is Manon's next "safety bar".

So much has been written about Vittorio Grigolo, but he lives up to the publicity. He is good, and not just a "glamour boy". He was most impressive in priest costume, deeply conflicted.  A better sign of his potential as an actor than the relatively straightforward lover scenes. With Netrebko, his chemistry's good, too. Her singing was luscious, even in the end, when she's dying. His matched in depth and fervour.

At Le Havre, the set's bleak, desolate. Manon is trapped and dies, but the horizons are wide open above her, just like in the church, compounding her tragedy. At last Manon and Des Grieux are alone together, so the simplicity is poignant.

Idiomatic French pronunciation, and a feel for the "music" of the language, much more fluent than in the recent Carmen. This matters because the dialogue in this opera is critical. Single words or phrases make an impact. Guillot de Morfontaine (Guy de Mey on 4/7) arranges a ballet to impress Manon, but all she says is "I didn't notice", and off she goes..

Movements are crisp, clearly choreographed, particularly in the crowd scenes where groups move together well, which neatly concentrates the impact, without overpowering the principals.  This is good crowd-directing, balancing the impact of a mass while keeping the individuality of those within it. In the Hôtel de Transylvanie, the movements in the crowd are micro managed to fit both music and function.

The trio (Simona Mihai, Kai Rüütel and Louise Innes), operate as a clear unit within the mass. Their movements are very carefully blocked, just as their singing is well paced and accurate. Their movements, too. Timings are so precise that they have to exit moments before Manon walks into the same spot. Innes is the last of the three to move. At the performance I attended, she was just a microsecond too slow and had to speed up so Netrebko didn't walk into her. It probably wasn't obvious unless you were looking and listening carefully to the beat of the orchestra. But it appealed to me because it showed how the movements were planned to each bar in the music.

Antonio Pappano conducted, almost as idiomatically as he conducted Simon Boccanegra a few days before. "Almost" because in Verdi's he's superb. In Massenet, he's merely very good indeed.  Altogether, even better singing all round in Manon than in Salome or even Simon Boccanegra. (Read about Salome HERE)

This production travels in September 2010 to Japan, where they take opera very seriously. They'll probably love it there  Netrebko's singing with Matthew Polenzani as Des Grieux.  Later it moves to La Scala and the Met in New York. Where they're probably already looking forward deliciously to booing parties and pious attacks on Pelly.  Ironically, Pelly and his team are more musically oriented than many acclaimed Met productions. Another review interesting  HERE.
at July 06, 2010