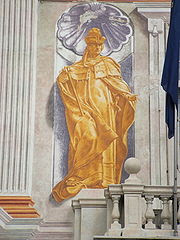 Saturday night and we're all indoors watching TV in this weather? Nuts? But Simon Boccanegra is on, from the Royal Opera House. BBCTV 2 tonight at 7.30. Pity it clashes with  Manon, also from the Royal Opera House at 7pm on BBC Radio 3, from 7. But this isn't any ordinary telecast, which is why it's on BBC TV2 a big channel. It's being broadcast simultaneously on BP big screens all over the UK, too, if you want to watch outdoors among crowds (which can be a lot of fun).

Before the premiere there was lots of negative comment on the internet about Placido Domingo's decision to sing Boccanegra. Success always attracts jealousy, so there are a lot of detractors, who'll pick at the least little thing. A lot of people get their kicks from hate. Fortunately people who know their stuff don't need to prove themselves by copying trolls. Domingo's Boccanegra is a historic occasion, beyond pettiness, and his performance much greater than meets the ear.

But there is more to performance than picking at nits. I was deeply moved "because" of the tension and imperfections. Boccanegra is an old man who's achieved a lot, but now the strain is showing on him. He knows that power and wealth don't mean a lot when you've got enemies all round and you don't have love.

So Domingo's performance in many ways benefits from the tension in pitch. Boccanegra is not what he was as a young man, he won't be as vigorous as he was. Notice how Domingo shepherded his resources in the prologue: he looked young and sang securely. Then by the poisoning monologue, he's letting the tension in pitch work for the characterization.

He's astute to pick on Simon B for his (perhaps) glorious coda. Listen how spare the textures are, more declamation than extended flourish, short, brief forays that don't expose a voice for long. And the orchestration, recognizably Verdi but austere and spartan, like the hard marble surfaces around him, and the political situation he's in.

There's a proverb that goes, when a hand is held high, some will see the dirt under the fingernails. Others will see that the fingers are pointing towards the heavens.

Please see my review  on Opera Today.and a more personal take on this site HERE.
at July 10, 2010