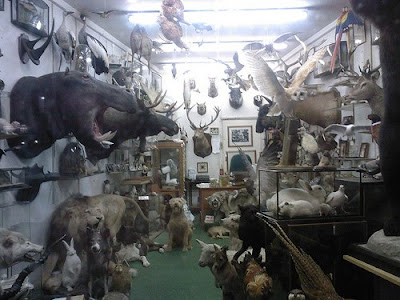 Prom 13 gives Simon Holt's a table of noises (lower case) the high profile coverage it  deserves. Highly acclaimed at its 2008 premiere, a table of noises is an anti-percuussion concerto, almost a "miniature" compared with pieces like James Macmillan's Veni, veni Emmanuel, another Colin Currie speciality.

The "table" refers to the table at which his disabled great uncle worked, all tools readily to hand, meticulously organized. It's a metaphor for the music. It's strictly defined but the very confinement generates inventiveness.

Holt uses simple means for maximum effect. Colin Currie plays a variety of small instruments, played in groups of three. Around him, a brass and woodwind orchestra making equally down to earth sound - is there a tin whistle in the mix? or a squeak toy? Doesn't really matter, the overall impact is down to earth, and jaunty.

Holt's great uncle Ash was a taxidermist who stuffed birds and small countryside animals. There's something surreal about taxidermy. It brings the woodland to the parlour. You can't be decorous with a dead badger in the living room, staring at you thru glass eyes, lifelike but immobile. Like Simon Holt, I too knew a taxidermist (game birds only). It's fiddly, messy work and quite unnatural, but strangely fascinating.

I loved a table of noises. It feels to me like a kind of grave but vivacious dance, maybe a ritual, maybe a celebration in some place or time very different from now. Clog dancing, even, and I thought of third world  musicians who do wonders with simple materials like sticks and barrels. That's a compliment to Holt, because it shows his innate feel for what makes good music.

Those sharp, clattering noises carefully spaced out with silences, those odd rhythmic progressions. Hammers and chisels in a workshop, clattering away. It is so much fun! Currently there's a fashion for saying new music and emotion can't go together. That's irrational. as all music has emotion. Emotion just means different things to different people. a table of noises proves that meticulously well constructed, innovative music can be vigorously free and passionate.


How much fun it was to hear a table of noises together with Richard Strauss Till Eulenspeigel. Both irrepressible, idiosyncrasic creatures that do their own thing, regardless of what the world might think. Performance wise, the best part of this Prom was definitely the latter. BBC NOW under Thierry Fischer aren't the most dynamic of BBC orchestras, so it was probably too much of a stretch  expect them to pull off a concert that ranged from Cherubini to Holt. Holt is their composer-in-residence, which is good though as that expands them. Hopefully when a table of noises is recorded, it will be with a specialist contemporary orchestra. Then we'll really gasp !  This is a work that will last.

Read more about Simon Holt HERE, and also labels on the right, which lead to other pieces he's written, like Centauromachy and Witness to a Snow Miracle.  photo credit (read the commentary, which is important)