Out in a blaze of glory - Garsington, Midsummer Night's Dream 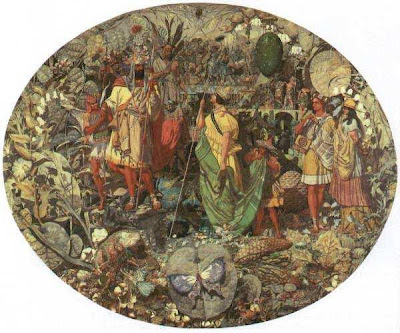 Garsington Opera is moving to Wormsley Park in 2011 but it marked its last production at Garsington Manor with a glorious coda, that augurs well for the future. As a friend remarked "We'll be talking about this for years to come".

Garsington is unique because the gardens are incorporated into the action on stage: landscape as drama!  It's an ideal setting for Benjamin Britten's A Midsummer Night's Dream, where the action takes place deep in woodland. As twilight slowly descends in realtime  Garsington, night closes in on the opera. Reality gives way to dream, mortals to fairies.

For this last production in its 21-year history, Garsington Opera brought in conductor Steuart Bedford, who worked with Benjamin Britten himself. Very idiomatic playing from the orchestra, Bedford coaxing sinuous glissandi from the strings, moody murmurings from the winds and brass. In this transformed, magical world, everything is slightly, but deliberately, out of kilter.At Garsington, the effect is enhanced because you're never quite sure what you're hearing. The bird song is natural, as there are trees all around. Trombones and trumpets materialize in the parterre garden, so they really are "heard from afar", like fairy horns.

Rebecca Bottone's Tytania is heard from a distance, before she enters. She has an extremely distinctive voice, which is immediately recognizable, and carries well, and here, it was used for maximum impact.

Fairies aren't necessarily passive innocents, but are creatures of the night in every sense. Tytania is feisty, she stands up to Oberon's demands, and is by far the stronger of the pair. Tytania is wild and free, so the edge in Bottone's voice strengthened the role. True character singers are rare, especially in female voice. Bottone is a treasure. She emanates energy.

Last year she was a magnificent Semira in Thomas Arne's Artaxerxes, a little dynamo running about the Linbury at ROH, yet still managing the impossibly long, florid lines. (Read more HERE). She also created The Maid in Thomas Adès's Powder Her Face, who upstages the Duchess in more ways than one. (Read about that HERE)  Bottone is luxury casting, because there are very few in her specialist fach.

Pairings through this play and opera keep changing, too, which is why Neal Davies's Bottom is Bottone's match.  He's another character singer, also very experienced, which makes a huge difference. Bottom is a yokel, so there's no need for the male equivalent of coloratura perfection. Instead, though, Bottom's quirky personality has to be expressed in other ways. Davies doesn't do obvious humour like funny accents or buffoonery.  His Bottom is quicker off the mark than he lets on, but that, too, is an aspect of Bottom's personality. He's the humble working man who dreams up plays for Dukes, after all. Is Shakespeare having a joke on us?

Bottone and Davies shine above all else, but there are other good vignettes. Pascal Charbonneau turned the unrewarding part of Flute into a tour de force. This Flute "is" sexually ambiguous, frustrated, resentful and yet a diva-in-the-making. In Britten's time no-one would have dared do such a provocative portrayal, but it's entirely right in context.  Sion Goronwy's Snug had panache, confirming his extensive experience.

The staging was more of a problem. Boys dressed in 40's military costumes much too large for them? Adults having sex while dressed  in school uniforms? Toys being locked away? Filthy mattresses, seedy decreptitude? Maybe this is a dig on Britten's sexuality, but it's out of order and not supported either by the opera or what is known of the facts. Thankfully, it was obliterated by the other big star in this production - the lighting!

Like magic, the lights wiped away the tawdry squalor. The Duke's palace appeared, trasnsparent glass chairs lit with twinkling silver lights. Then, when couples are reunited, and order restored, night returns, and the fairies spread their magic again, this time on us, the audience.

Thousands of golden fairylights suddenly lit up at once, transforming the darkness closing in. Festoons of lights, twined round the topiary trees and box hedges in the pareterre garden, garlanding the trees beyond. A moment to remember forever.  Garsington goes out in a blaze of glory. Next year, it moves to an even bigger landscape, at Wormsley Park.

A word about the lighting design which at Garsington this year excelled all expectations.  Bruno Poet, who designed the lighting for this Midsummer Night's Dream deserves special praise. This was seriously imaginative work, which larger opera companies would envy.

Poet and his team spent hours carefully working out circuitry and placements. Designing this in a conventional setting would be hard enough, but in an open air setting, artificial lighting must cope with natural light, which lasts to 10pm at this time of year. Then ther's the added problem of Health and Safety. In ordinary theatres, the audience doesn't walk round the wiring. In Garsington, the gardens are a feature the audience comes to see. Poet and his team managed to conceal the wiring so well that it didn't intrude.

The lighting for Armida, also at Garsington this year, was designed by Malcolm Rippeth.  Read about it HERE. As in all cases, follow the links emnbedded in these postings to the proper, formal review in Opera Today, because they have production photos.
at July 02, 2010