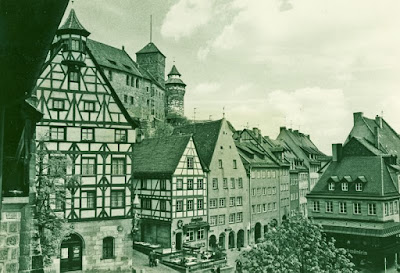 The BBC Proms brought the Welsh National Opera's hit Die Meistersinger von Nürnberg to the Royal Albert Hall and to the world, via broadcast. (follow this link to the full TV version (also links to audio only) (beware though the insufferably smarmy Stephen Fry)

Anything Bryn Terfel appears in will elicit ecstatic praise because he's a national hero. He's iconic: you don't have to be Welsh or British to adore him.  His sheer presence makes Prom 2 unmissable, even if you don't know Wagner. A good introduction to the composer and his music.

Terfel was, of course, magnificent. Hans Sachs is an ideal vehicle for his talents so it's a surprise that this is his first time in the role. Terfel's forceful timbre suits the "public" Hans Sachs, revered Meistersinger and shaper of public opinion. The Meistersingers represent civic pride and power : Wagnerian singing is often cursed by "park and bark".  Fortunately Terfel realizes that there's a lot more to Sachs than public persona. Sachs is a poet after all, and a shoemaker - solitary professions, unlike Town Clerks. Notice how Wagner keeps Sachs in relative reserve until Act One Scene Three.

Terfel's finest moments thus came in moments where Sachs is on his own, in his workshop, relating to others one to one. Was duftet doch der Flieder let Terfel sing quietly. Declamation isn't Sachs's style. Terfel's Wahn! Wahn! Überall Wahn! could have had more world-weary pathos, and more delicacy on words like Der Flieder. The Elder tree after all, is critical to the whole opera, for it means new growth, just as Walther von Stoltzing brings new ideas to the Meistersingers. Johannesnacht is Hans Sachs's name-day, to men of his time a potent symbol.  But perhaps I quibble, because the Proms reaches mass audiences, not necessarily specialists. Better that Terfel inspires audiences to listen more and discover Wagner in their own time.

Terfel looks the part, physically overwhelming Christopher Purves's Beckmesser. Terfel's a big man, but he's nimble on his feet when he has to be, dancing a merry jig around Purves. What a good idea to incorporate this detail from the full staging into concert performance! It's invigorating. Sachs may be old, but he's lively. That's why he sees Walther's potential.

This Beckmesser, though, easily stands muster against Terfel's Sachs. Christopher Purves has a real gift for characater singing. He moves about in quick, tense gestures, which amplify the acid-brightness of his singing. Beckmesser isn't an outsider, he's a Meistersinger and Town Clerk, an "insider" if there ever was one, obsessed with rules and status and keeping newcomers out. Purves's Beckmesser is a fool, but too cheerful to be evil. His "songs" are done as are amusing parody rather than grotesque. The harpist who really plays the tune of the lute make it sound quite beautiful in a quirky way.

There's also a lot more to Die Meistersinger von Nürnberg than the nationalistic overtones shamelessly hijacked by the Third Reich. So much for their "respect" for Wagner. Die heil'gen Deutsche Kunst meant something completely different to Hans Sachs, living as he did during the Reformation, when Germany was being torn apart in the struggle between Lutheran (German) and Catholic (Foreign) values. That's why Sachs was interested in German identity.

Wagner was doing a Luther, too, trying to develop a new kind of music theatre, based on German tradition, as opposed to French and Italian opera.  Germany didn't exist as nation-state until 1871 - several years after Meistersinger was written. It was a concept with many positive aspects, supported by many for its modernizing potential. This makes the rise of the Third Reich even more troubling, for it is a paradigm of society..

Prom 2 Meistersinger from WNO reflected Sachs's concept of Germania, not Hitler's. In the WNO production, images of German cultural heroes through the ages are projected onto the stage, reminding us that "holy German art" goes back a thousand years and has produced men like Bach and Goethe. And Art is holy because of what it is, ultimately greater than nations.

Walther von Stoltzing is the real outsider in Nuremberg, having learned singing from nature, from birds in the woods (though he read Vogelweide, showing he, too, knows tradition).. He's an aristocrat but significantly declassé, a wanderer like Wagner himself. Because Germany was fragmented until very recently, Germany was full of wanderers, especially after the Thirty Years and Napoleanic wars. Wanderers recur throughout the Romantic genre. Stolzing symbolizes the new. Raymond Very's Walther is good, though not transcendantly luminous. The Prize Song is ravishingly beautiful, but Wagner shows how it develops through experience. Walther's first effort isn't great, but he meets Eva,. His art is created through love. When Very sings the words. Eva, im Paradies his voice expands warmly, expressively.

Amanda Roocroft's voice has mellowed and rounded out well. Even if she isn't an ingénue, her Eva is very well realized. This must be one of the crowning moments in her career, immeasurably better than when I last heard her sing Eva about ten years ago. She was spirited, her voice agile and bright. Die Pognerin is too big a role for a babe, which makes casting tricky. Roocroft convinces through her voice. Arguably, Eva doesn't have to be a teen. Magdelena (Anna Burford) is older than David, but she appreciates Walther before he does.

The real discovery in this production is Andrew Tortise's David. He's wonderful. Tortise's huge Act One Scene one arias are a tour de force, but Tortise sustains the inner logic through the different stages,  pacing himself carefully. On top of this, he acts well, too, a fresher, more impudent Walther in the making. It's an intelligent characterization, because under the comic surface of the role, David is a powerful figure. Wagner doesn't write so much for the role for nothing. Like Walther, David is part of the future. Tortise has impressed me several times before in minor parts. Now, with this superb David, Tortise is the future, too.

Brindley Sherratt's Pogner is authoritative as befits someone of his experience and stage personality. Pogner is a more troubling figure than most productions express, because Sherratt makes him sound so firm. Why is he giving his daughter away, against her will, ostensibly for the sake of art? Can people be traded for abstract ideas? Therein lies the dark secret of this opera.

If art must be controlled through guilds and conformist rules, is it art? Are rules a means of suppression, or bulwarks against dissolution. Implicitly, in the background lurks the idea of a world in constant transition, where standing still means falling back. Perhaps this is why Meistersinger attracts the Far Right, though there's a lot in it to appeal to the Far Left as well.  This set of Meistersingers sang pleasantly, but only Sherratt's Pogner hinted at more unpleasant levels. 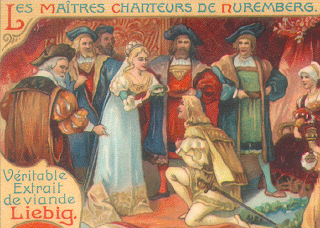 The Chorus and Orchestra of Welsh National Orchestra, conducted by Lothar Koenigs, supported the performance solidly.  Any performance at the Proms generates its own excitement, which creates an aura of wonder that's hard to resist. I had a good time, though on purely musical terms this Prom wasn't a match for the great Meistersingers of the past, though it will be fondly remembered by English-speaking audiences..Nonetheless, the Proms aren't about perfection. They're there to get people stimulated, so they have a good time and go on to hear more.
A full review of Prom 2 will appear shortly on Opera Today  (see list at right)
Prom 3 Simon Boccanegra, Domingo (see my review of the Royal Opera House premiere)
PLENTY more on this site about the Proms and other things coming up.  Use "search" button and please keep coming back Please read more about Andrew Tortise HERE
at July 18, 2010