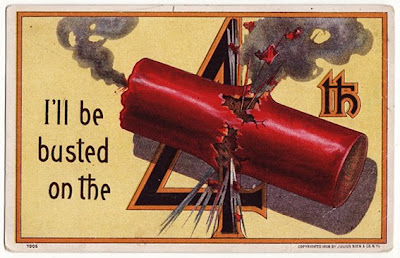 4th July and I'm midway thru an opera marathon - 6 operas, 8 days. Not usually a good idea, because, for me, depth is more important than breadth. But it will be a challenge! What I'm celebrating is the very fact that we have so much choice, and in many genres..

Last week, I went to Simon Boccanegra, A Midsummers Night's Dream.and caught up with a bit of orchestral left over from previous week when I was at Aldeburgh. Alert!  You can still listen to broadcasts from Aldeburgh on BBC Radio3 online. I enjoyed Christiane Oelze's Messiaen Harawi, one of my favourite works, see here and here. Oelze didn't make it last year and I didn't make it this year, but thanks to the broadcast everyone can hear it. Oelze sings a lot of baroque, so she's made me think of Harawi as a Pagan Liturgy. She brings out the ritualized structure of the piece and the idea of personal sublimated into cosmic.

Alas because I was at Salome at the Royal Opera House (report coming soon) I missed the broadcast of Tamerlano.  I don't care what anyone says, I really enjoyed it at ROH.  My friend and I took it in turns to doze off. I was half awake in the first act, he in the third, but luckily the third act was by far the best, and by then I was fresh enough to appreciate it. The secret of liking Tamerlano I think is to accept it for what it is, a piece that's come from an aesthetic completely different to 19th century Grand Opera, and from an era when time moved more slowly. On DVD, you can pause and get a drink. Just like they did in Handel's time. When they got back, the same aria was still going on. Twenty minutes per sentence!

Manon gets deported to America, so on July 4th I thought about what Manon missed out on (report coming soon too).  At last I get to go to Idomeneo and find out what the fuss is about, and then, Glyndebourne, Don Giovanni. I'll be exhausted, but it will be fun and I'm grateful.  Then, the Proms! Mahler 8, Meistersinger, Simon Boccanegra. Truly we are blessed that we have so much choice and so many opportunities to listen in different ways. The Proms will be broadcast internationally, online, on demand and on TV. The ROH Simon Boccanegra is being broadcast next Saturday too, ahead of the Proms performance, so catch that and compare. And Glyndebourne Don Giovanni will be on TV at Christmas .
at July 04, 2010