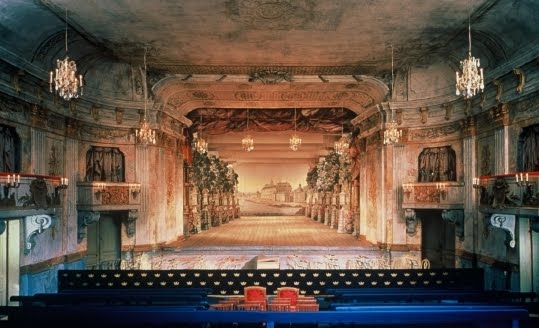 The Court Theatre at Drottningholm was built in 1766, but was sealed up after the death of  Gustav III, King of Sweden. Thus it survived, pretty much intact until rediscovered in 1921. Like Český Krumlov it's authentic baroque, perfectly preserved.

Drottningholm was a  private Royal theatre, so though it's elaborate, it's tiny. No large wings. Scenes are created by moving a series of proscenium arches. The stage is surprisingly bare, no attempt at fake realism.  "Classical" implies elegance, Grecian simplicity. So much for the myth that opera should be late 19th century excess. If there's anywhere to experience Mozart as he might have been heard in his own time, it's Drottningholm, where even the orchestra  are dressed in wigs and breeches, even the women!

After ENO's Idomeneo, I watched Drottningholm's Idomeneo, filmed in 1991, still available on DVD because it's a classic.  Only one or two of the singers are familiar, but the performance is very good. What's really amazing though is how spare the sets are, and how effective it is.

The backdrop is plain : nothing but a few strips of painted waves at the base. Completely stylized. When they move, it's done by having men shake the boards up and down. What dominates is the blankness of the "sky". Nothing on stage except for a simple bench where Ilia sits, which later turns into a simple altar where Idomeneo faces his gods. The only scenery comes from the prosceniums at the side, which are painted very realistically. One frame simply shows pillars, meaning the palace. Movies and TV had trained us to expect too much realism on stage. Nowadays, audiences would be screaming "Dread Regie". Audiences at Drottningholm would have been bemused. For them, theatre meant using your imagination.

Ilia appears alone, swathed in silver-grey, emphasizing her isolation from the rest of the Cretan court. Idomeneo and Idamante wear costumes of no particular period, just shades of black, enlivened with silver embroidery. The crowds here are covered in simple black, with tricorn hats. The soldiers look Roman, not Greek, but that's OK, opera isn't history. The crowds appear and exit like a Greek chorus. They don't need to be "doing" anything but sing.

But look how Neptune makes his mark!  Just a faint portrait of him on the backdrop, but thunder, dark chords in the music, Elettra  writhing on the ground, voluminous sleeves waving, like black waves. Then the chous appears, a mass of black, faces masked in white, arms raised. The fake waves move up and down and Idomeneo stumbles in and sings his glorious recitative.

When Ilia sings her "breeze" aria, white muslin curtains billow from the wings. On the film, extra cutrtains are superimposed on her image, buit it's not necessary, the idea of open seas and skies is already present in the simplicity of the staging.

When the people rise up, Neptune;''s Priest is a huge, imposing fellow, all black, with flowing white locks down to his waist - the idea of billowing clouds, foam on waves again. He's the God's represenatation as well as representative. How austere, yet how effective. The crowd now are in basic late 18th century costume, but black and masked. Neptune's face appears again on the backdrop. Idomeneo faces his god face to face now, it feels powerful, like a confrontation. So when the god's voice booms out, it makes emotional sense.

Do try and get this Drottningholm Idomeneo

DVD if you can, because its' an excellent performance (and in Italian thank goodness, opera in translation is rarely right).  It's also worth getting because it shows how simple period performance could be, and surprisingly modern. What is "traditional" after all, but a theoretical construct?

COMING LATER : Full review of Glyndebourne Don Giovanni, I don't do superficial so it takes longer. Haha!
at July 11, 2010