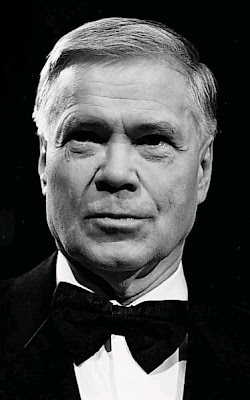 Dietrich Fischer-Dieskau has died, ten days short of his 87th birthday. For me, it's like the death of a parent, for he played such a big role in my life. So I'm not going to write something trite to jump in on the bandwagon. That's insincere. As regular readers know, I don't write unless I can offer something personal or original. Someone like DFD deserves that kind of respect..

And yet, it's hard to find the words to express what he meant. He was a major part of my life since I was 14. Through him I discovered the whole German tradition, starting with song, branching out into orchestral music, literature, poetry, history and painting. Fifty years of adventure, starting with a tinny radio. Without DFD would I have become the person I am?

And more importantly, what did DFD mean to the world? Read the biography by Hans Neunzig (1998) which is the best we've got so far. The real significance of Fischer Dieskau would, I think, emerge all the greater without hagiography. He needs to be appreciated in the context of his times. He wasn't the "only" singer around, by any means, so that context needs to be remembered. But what he did that was special was to bring Lieder values to the fore. Had DFD spent his career in opera, he would not have been the phenomenom he was.  Above all else, he was a concert artist (and by that I include his Bach). On the concert platform, he embodied the Romantic Individual.

The painting by Caspar Friedrich David is such a cliché that we forget what it means. A wanderer is standing on a peak. He's had a struggle to get up there before trails and hiking boots, and he perches dangerously on a rock, looking out into the distance, made mysterious by clouds and fog. The man is a wanderer, who doesn't follow fixed routes or seek final destinations. "Ich komme vom Gebirge her, Es dampft das Tal, es braust das Meer, Ich wandle still, bin wenig froh, Und immer fragt der Seufzer, wo?"  Fischer-Dieskau embodied this Romantic spirit. It's an essentially high minded, intellectual aesthetic, and Fischer-Dieskau's elegant nobility fitted it well.

DFD was the son of an elderly Berlin schoolmaster, and thus a direct connection to the better values of 19th century Prussia - learning, discipline, hard work, idealism.  DFD came of age just after the war, when Europe was in turmoil. It's fashionable these days to attack Walter Legge and Elisabeth Schwarzkopf, but they had a vision of Lieder as hyper-refined art that served some kind of esoteric higher function. Fischer-Dieskau and Schwarzkopf became a formidable team. They pioneered uncompromising single composer recitals, selling out the Royal Festival Hall with all-Wolf programmes. Unthinkable now? Together, Fischer-Dieskau and Schwarzkopf promoted other repertoire relatively unknown outside German speaking circles. I discovered Mahler through their seminal Des Knaben Wunderhorn recording (1968). I'll defend that passionately because they sing with great enthusiasm. Fischer-Dieskau also sang in ensembles with most of the leading singers in his day - Brahms parts songs, for example, and of course his Bach series with Karl Richter and others (hear the clip HERE and recognize the voices in "Capella Bavariae". singing Schubert Der Gondelfahrer D809).

Furthermore, in the 1950's and 60's, recordings became mass market. With full length LPs it was at last possible to enjoy long attention span music at home, and to listen repeatedly, unlike live or on radio. Fischer-Dieskau embraced this technology like no-one else. He recorded nearly everything in the repertoire, and preserved as many performances as  feasible on tape. Perhaps they'll be issuing "new" DFD recordings for years to come. Indeed, one of DFD's sons, when asked what his Daddy did for a living, said "He makes LPs". Recordings have changed the way we listen because we're attuned to detailed, analytical listening, perfect for Lieder.

Fischer-Dieskau is a father figure, but you truly honour your father when you grow up properly.  DFD had mannerisms and faults - so what? Who doesn't?  Ultimately, I think Fischer-Dieskau's greatest achievement was to get us listening and thinking about song and appreciating its individuality in the deepest sense. We will truly honour Fischer-Dieskau by understanding song as a living tradition, which grows and proliferates through many interpreters and interpretations. That's DFD's true legacy : love of the art of song, not celebrity..