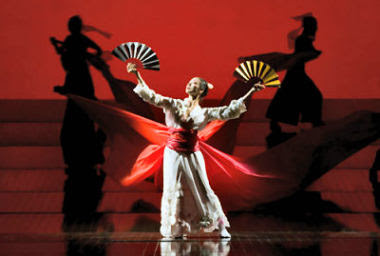 It's almost exactly seven years since the Anthony Minghella production of Puccini Madam Butterfly premiered at the Coliseum, London for the ENO. Minghella himself has passed on, but this time round the principals are the same. Mary Plazas sings Cio Cio San, Gwyn Hughes Jones sings Pinkerton and thge Puppets of the Blind Summit Theatre will be doing their thing. I caught the production first time round, the first night of the first run.

Madam Butterfly is perhaps even more relevant in our Global Village where cultures and races mix more fluidly than ever before. Minghella’s vision pits Puccini's gloriously Italianate score with the stylization of Japanese theatre. A woman dances with the black clothed figures of the men who manipulate Bunraku puppets. Gradually they tear her obi and it unravels like a river of blood. It’s a great image: woman as puppet, controlled by men. Its violence also hints at the tragedy to come. Bunraku may have a history of love suicide dramas but that’s lost on the average western audience. Fundamentally, Madam Butterfly isn't about Japan at all.

So the "neon Shanghai Tang" colours (as I called them then) of the production are there to entertain. They impart an exotic glow, so the real meaning of the plot is disguised.  Beneath the sentimental cherry blossoms and images of women as dolls, Madam Butterfly is a shockingly brutal story. Pinkerton's a sex tourist, exploiting the power he has to screw a little girl (in every sense of the word). Absolutely to Puccini's credit that he saw through the colonialist values of his time. He had no illusions about the superiority of western culture or Christianity.  Pinkerton is a weak man, supported by gunboats and consuls.  Indeed, it's an anomaly that Madam Butterfly was set in Japan at all, since Japan and Thailand were the only countries in Asia to remain independent and not become colonies. All over Asia and Africa, local populations became second-class citizens in their own countries. As Puccini implies, imperialism does not equate with civilization.

Until westerners stop seeing Madam Butterfly as a portrait of Japan, they're not going to deal with the real issues, which are only too relevant today. While it's no longer acceptable to sneer at blacks, Jews, women or gays, Asians (yellow, brown or olive) are fair game. Unconscious racism exists, and sadly among people who should know better. Perhaps it's ignorance, or fear, but it won't be eliminated until people stop making assumptions, and allow that just maybe, Asians know what they're doing, and western mores don't always apply.

Nagasaki, where Madam Butterfly is set, was an "international" port from the 16th century, where western influences reached Japan and from which Japanese esxports reached Europe. It's interesting that Puccini shows that Cio Cio San isn't merely a passive plaything. Long before Pinkerton arrives, she's already aware of the west and swallows the myth of western superiority since she thinks that through Pinkerton she'll get a new life. When she realizes her dreams were delusion, she kills herself. Anyone who has seen Japanese horror movies Takashi Miike’s Audition or Hideo Nakata’s Ring will be familiar with the idea of traumatized young women who are quite capable of hiding ferocity under a demure mask. Cio Cio San fights back, though she ends up hurting herself. You could read 20th century Asian history as a response to colonialism. Certiainly, Japanese modernization inspired other countries in Asia, many Asian leaders studying the Japanese model. Ironically, the Japanese succeeded in ridding Asia of colonialism, though not quite in the way they intended. (the photo show Tamaki Miura, a Jaoanese singer in a Japanese production of Madam Butterfly in 1922) 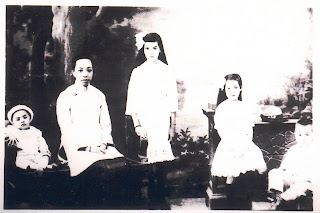 What troubles me about this production is the portrayal of the child Sorrow. He's shown as a puppet with a skull for a head. These days child protection laws work against having real children in  roles like this, late at night. Hence puppet. But is Minghella telling us that the child is just another puppet in a wider game? In the opera, his role is to be the innocent, loving being who inspires love from everyone, even in Mrs Pinkerton. So why should he be portrayed as an ugly miscreant? Are mixed race people somehow not human? (click on photo to enlarge).

Conversely, Minghella confirms how important this non-speaking part is to the whole story. What is to happen to this boy, taken from his environment and raised in a monocultural society where he'll always be an outsider? Given US racism towards Asians well into our generation, there would not have been a happy ending. All over Asia and Africa, there were huge mixed race communities, bridging cultures. Thousands of real life Madam Butterflys and certainly not all products of prostitution. Ironically, Japan was one of the few places where there weren't big mixed race communities. Nowadays there are lots of first generation mixed marriages, and also lots of Asians growing up in non-Asian environments. It may be fashionable to think that heritage doesn't matter, but I'm not so sure. So enjoy Madam Butterfly at the ENO and think about the wider context.
LOTS on this site about Nagasaki, Japanese and Chinese culture, Chinese stereotypes, modern Asia, cross culture, Puccini and Madam Butterfly. Please use search labels.