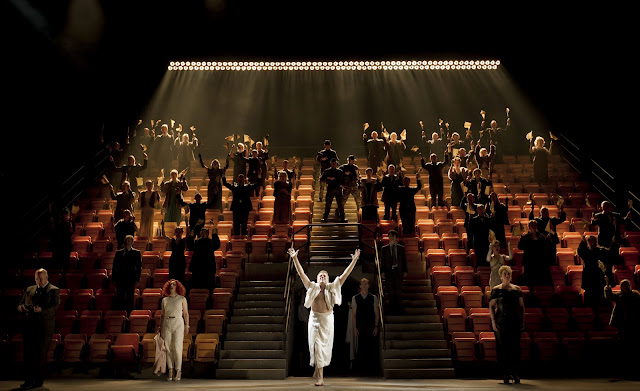 Detlev Glanert's Caligula at the ENO shows how powerful modern opera can be. Caligula was a tyrant, but this opera isn't sensationalist. Based on the play by Albert Camus, it's a study of human emotion in extreme situations, expressed in vividly dramatic music."The opera starts and ends with a scream", says director Benedict Andrews. It's primal. This phase in Caligula's madness is set off by the death of his sister Drusilla, allegedy murdered because she became pregnant by him. It ends with Caligula being killed. Suddenly he shouts "I'm still alive!". The cycle doesn't end. Caligula's madness is universal psychosis. 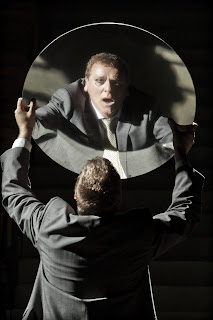 Camus was writing when Hitler and Stalin were in power. Glanert, despite his jovial personality, doesn't shirk from the political implications. Caligula (Peter Coleman-Wright)  is mad, and everyone knows it but he has absolute power. His inner circle feed his delusion, but he's sane enough on some level to despise them for their hypocrisy. Ralph Myers's set is uncompromising. The audience is confronted by a wall of seats, not unlike a theatre. Perhaps it's an arena where gladiators kill each other to entertain onlookers. Are the populace any less bloodthirsty than their Emperors? There but for fortune. Caligula looks at himself in the mirror of the moon, which refracts blinding light back at the audience.  We can't not get involved. We're in the Coliseum, after all! Madmen become tyrants when ordinary people don't take responsibilty. Incidentally, modern tyrants have used football stadiums to imprison people and do massacres, so the image is even more poignant.

In the middle of this arena there's a tunnel, a discreet reminder of Caligula's psycho-sexual confusion. Despite his madness, he's trying to make sense of his situation. "Loneliness!  Loneliness!" he wails, though he knows he can't escape the ghosts of those he's killed. What motivates his excesses? He's compelled to outrage every sensibility. Yet that traps him in a vicious cycle, too.Are his provocations a kind of death wish, to goad his public until they crack? 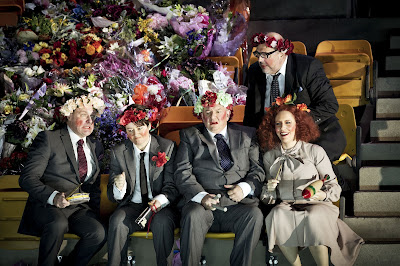 Glanert's music builds Caligula's complex personality.  An electronic organ rips through the more refined instruments in the orchestra. Maniacal crescendi, more meticulously orchestrated than their impact might suggest. Ryan Wigglewswoth conducts with the precison this music needs. Like Caligula, all is not in the roar. Caligula's mind works logically, though his ratiionale is flawed.  Some of this music is very beautiful. Caligula knows thw world around him is ugly, which is perhaps why he idolizes the moon.  Tender woodwinds make his fantasy as alluring as he thinks it is. But Caligula can't sustain a line of thought for long. His extreme, unpredictable mood swings are mirrored in the music. The parody burlesque and the silly songs the poets sing add wry humour. If we aren't humane, even to madmen, we lose the very humanity that stops us becoming tyrants. Gaiety throws grotesque into high relief. When we're at the heart of the beast, Glanert's textures are clear. Yet scratching, thudding beats in the percussion build up pressure, and the quiet heart will again explode. 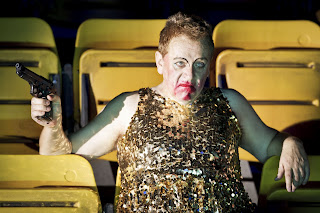 Caligula is a difficult role to sing and Peter Coleman-Weight succeeds well though he doesn't quite get the craziness that's in the part. The falsetto screech, for example, could be chillingly dangerous, for it touches a raw nerve in Caligula's soul. Caesonia was old enough to be Caligula's mother, and it's she who indulges him in his madness. The exchange between Coleman-Wright and Yvonne Howard's Caesonia could be much more sinister, though perhaps that might be too unsettling for British audiences. For this same reason, it was probably best that performances all round were good, rather than especially sharp and distinctive. Pavlo Hunka impressed as Cherea the procurator, as did Carolyn Dobbin's Scipio  and Brian Galliford's Mucius, and the irrrepressible Eddie Wade filled his two parts well.

But the very fact that Glanert's Caligula is in London at all is a cause for celebratiuon. British audiences are sadly cut off from continental European music and opera in particular. Caligula is a much more sophisticated opera than Wolfgang Rihm's Jakob Lenz (read review here) (written when Rihm was only 24), so it doesn't have to be prettied up for British audiences. This ENO Caligula is much better than the production in Frankfurt that keeps getting revived. .(the singing there was sharpr). Benedict Andrews's clear, unfussy style concentrates on the inherent drama. In Germany, this would be a hit. Glanert's music is certainly not intimidating, so British audiences should appreciate it too. After all, he's guided by what Hans Werner Henze told him when they first met, that opera should communicate.

Glanert's music has featured at the Proms eight times, but I can't remember seeing any of his many operas in this country. Even the operas of Hans Werner Henze are rarities here, though they're often performed on the Continent. Henze is such an impoirtant composer that it's shocking how little Henze we get here. How can we assess the genre if we don't  hear enough to judge?  So Glanert's Caligula at the ENO is an excellent point to start from.


Photos copyright Johann Persson, ENO
A more formal version with full cast list soon in Opera Today. Please read my other posts on Glanert, Henze, ENO and satgecraft (follow labels below)
at May 26, 2012