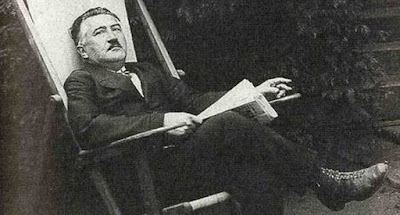 Vladimir Jurowski's leading the London Philharmonic Orchestra on adventures off the beaten track, some more fruitful than others. But better that than conducting safe bets on auto pilot. We need the Jurowski's of this world! Jurowski's latest programme at the Royal Festival Hall (which was being recorded) was a winner.

Last year, Jurowski conducted a concert built around Josef Suk's Asreal Symphony and Janáček’s The Eternal Gospel. Read more about that here, because Jurowski's two concerts connect, one growing from the other.Suk's Asrael Symphony grew from trauma. In the Bible, Asrael is the Angel of Death. Suk's wife Otilka had died suddenly, a year after the death of her father Antonín Dvořàk, Suk's mentor and friend. The symphony is a massive monument in music, through which Suk confronts his grief and perhaps finds a way forward.

The Ripening  op 34 is based on a poem, Zrání, by Antonín Sova, a contemporary of Suk, and a "modern" poet of the renaissance in Czech culture. I can't track down the poem in translation, but apparently it's about late summer, the "ripening" a metaphor for maturity and the cycle of life. So perhaps The Ripening, written over a long period ten years after the Asrael Symphony can be heard as a companion piece. Youth and love appear in the delicate, lyrical passages, swept away by fate in the form of the wild scherzo which dissipates into a strange plateau of looming, keeing lines: dark strings, gloomy winds. Yet again, trumpets stir the music on. Jurowski places a small brass section in the choir stalls so the sounds they make call forth over the tumult in the orchestra. When the offstage voices sing their wordless song, it's as if we're hearing voices from another dimension. The Ripening isn't specially rare, as there are several versions around : Talich, Pešek, Neumann, Ancerl, Bělohlávek and Kirill Petrenko. Jurowski's good at the broad sweep but the quieter moments come through sensitively, too.

Dvořàk Piano Concerto in G minor op 33 (1876) was described by Kurt Honolka as "a sort of symphony wiuth  piano obbligato, the solo part unrewarding which is why it is mostly played in the arrangement by Vilem Kurz, a piano professor". On the other hand, if soloists find the part interesting, they can make it sound rewarding. Martin Helmchen certainly seems to find it gracefully lyrical. Listen to him in the video clip below. 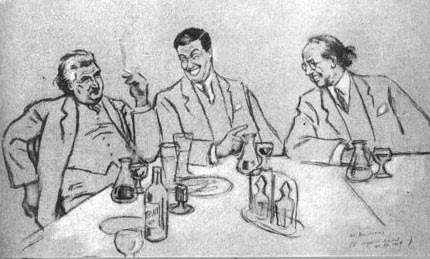 At first, there didn't seem much point in starting a Suk/Dvořàk programme with the suite on Janáček The Cunning Little Vixen, apart from the fact that it's fun and that Jurowski is conducting a Family Matinee at the Royal Festival Hall on Saturday 13th May, and will, of course be conducting the opera in full at Glyndebourne a week after that. Not all Czech music sounds the same!

Ironically, Brahms might have been a better choice, since Brahms, Dvořàk and Suk had stronger musical connections, and The Ripening would have even greater resonance in that context. .But the suite was created by Vaclav Talich, pictured centre in this sketch with Josef Suk (smoking) and Vítězslav Novák. Three of the biggest names in Prague in the early 1930's, all good friends and familiar with one other's work. But think more deeply about The Cunning Little Vixen. Chances are that the Glyndebourne production won't be as bright as the performance might be.  The opera's based on a comic strip, it's not naturalistic, nor twee. The "animals" are allegory, the story's about the cycle of life and death. So a very good opener to The Ripening, after all.