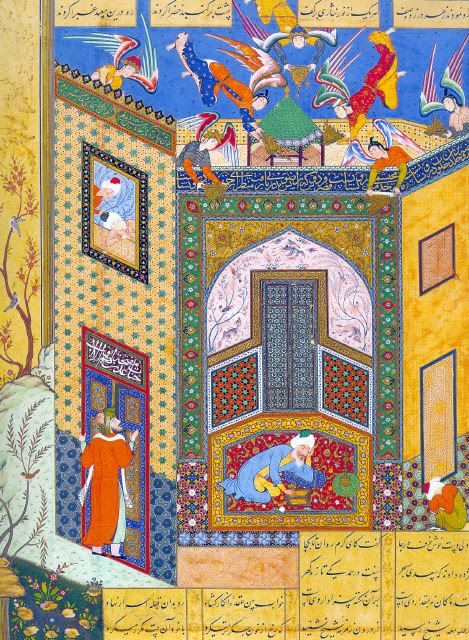 Karol Szymanowski's magnificent Song of the Night (Symphony no 3) received a splendid performance at the Barbican Hall, London, with Peter Eötvös conducting the London Symphony Orchestra.

In February, we heard Vladimir Jurowski conduct Szymanowski's Third with the LPO at the South Bank: gorgeous, shimmering textures, so perfumed one could swoon. It was a pertfectly valid reading and beautiful.  Boulez, however, intuits the savagery beneath the shining surface, and .Eötvös replacing him due to illness, respects this approach. The Song of the Night can only emerge under cover of darkness, when the worldly market place is hushed and "the market of the stars" is revealed. "This night, Leo, and Orion, Andromeda and Mercury shine crimson!"  The 13th century mystic Jalaal'ad-Din Rumi writes about a love so deep that it's cosmic, yet only revealed in secret. Persians knew their astronomy and astrology. "This night, Saturn casts  his malign control and Venus sails in the golden drizzle". The stars are exquisite, but they control fate and cannot be reached by mortal men.Whoever these lovers are, they're not fated to be together except in dreams.

As if shielding the poet in a night garden, Szymanowski uses a huge orchestra to create a lush, exotic atmosphere. Yet note how Szymanowski immediately establishes two separate currents: the dense "undergrowth" in low winds and strings, and high stings screaming alarm. "O nie spij, druhu, nocy tej" (O, sleep not, dearest friend this night") sings the tenor, Steve Davislim. The chorus repeats the dense textures this time, but through by the extreme high tessitura of the violin (Gordan Nikolitch).  Patterns within patterns. Szymanowski's writing Persian art into his music. Throughout this symphony, violin and singer seem to duet, separated by the vast crescendi in the orchestra and choir. A shy lilting dance led by winds, then Nikolitch soaring forth. Pizzicato, sudden irruptions of brass, even a kind of wayward march: a sense of alert anticipation. This night is not restful. The long middle section is full of incident, but then, silence, out of whch Davislim sings, with minimal accompaniment. "This night God and I are alone!". Cymbals unleash crescendi: we are hearing what the poet sees in the universe. The solo violin re-emerges, almost impossibly high pitched and pure. Boulez manages to hint at perverse Baudelairean undercurrents. Eötvös and the LSO aren't quite so unsettling, but Davislim sings so idiomatically that he'd be a top choice as the Shepherd in Król Roger. The parts are linked, for the Shepherd represents danger as well as liberation. Zamilknięciem wiąże język Lecz ja mówię bez języka nocy tej! (surrounding silence ties my tongue but I speak without my tongue tonight) .

The programme was big and Eötvös conducted Bartók's Music for Strings, Percussion and Celesta with more vigour. The first movement was a little too diffuse, though Eötvös delineated the separate subgroups  in the Allegro and Adagio cleanly. Nicolaj Znaider was the soloist in Bartók's Violin Concerto no 2. Almost any companion piece to Szymanowski's Symphony no 3 will pale in comparison, especially since the violin part there is so strange and disturbing. But Boulez chose the programme well, for the concerto is provocative in its own way. The solo part taunts and twists away from the orchestra as elusively as the part  in Szymanowski's symphony. Znaider played with grace and assurance, exploding passionately in the wild cadenza. Utterly apposite to the deeper meaning of the symphony.

This concert is available online on BBC Radio 3. Listen for Znaider and Davislim, who has exceptional stage presence. Get the recording of Szymanowski's Third on DG with the Weiner Philharmoniker conducted by Pierre Boulez for a more intense performance.  Later this year Valery Gergiev will be conducting all four Szymanowski symphonies, combined with Brahms, not the first composer that springs to mind in this connection. All the more reason to hear what Gergiev does with Szymanowski.
at May 10, 2012