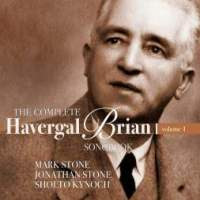 What is the appeal of Havergal Brian? He draws extreme opinion. Friends of mine admired him greatly, so I listened with respect, always assuming that one day, a perfect performance would make Brian work for me as it did for them. Please read more here and do the exclusive Havergal Brian crossword !

This could be a cult favourite, because it's very enjoyable indeed. I've played it over and over with pleasure. Stone's elegant, dignified poise and Kynoch's lyrical playing make the best possible case for Havergal Brian piano song. There are also short works for solo piano and piano and violin (Jonathan Stone). The booklet is informative, with the high quality presentation that Stone Records is noted for. Havergal Brian could not have dreamed of anything as stylish as this.

But remember Brian's Symphony no 1 (the "Gothic") at the Proms last year? At the Royal Albert Hall, it was a magnificent theatrical experience, conducted with finesse by Martyn Brabbins. I listened with awe to the performance and the sheer audacity of Brian's vision. (read more here). But as music, the Gothic is decidedly odd.  Brian's fifteen minutes of international fame very nearly killed his reputation. So why does Brian have such a devoted following? The Havergal Brian website (HERE) is a labour of altruistic love, so comprehensive that anyone could become an instant expert without actually hearing the work. Perhaps Brian is endearing because he goes where other composers fear to tread. Perhaps it's the Great British Eccentric tradition, which honours those who Try Very Hard.

When the works on this recording were made, the heavy hand of worthy Victorian earnestness still  haunted British song. Ralph Vaughan Williams was one of the brilliant exceptions, rather than the norm.  Don't listen to Brian and think in terms of RVW, Butterworth or Gurney, but rather to the social context of song in the period, which owes as much to parlour song and hymnal as to ersatz pastoralism.  Think Granville Bantock, Peter Warlock or C W Orr, whom Stone Records has honoured in a recent recordng. which Andrew Clements admired  I'm less convinced, perhaps from having toiled too long in the lesser recesses of English song. But we need to know those valleys, if only to appreciate the peaks. That's why Stone Records' traverse of English song is so important.

The songs of Havergal Brian appeal to me because they're so unself consciously self conscious.  Brian aims high, setting John Donne, Yeats and Shakespeare. The message (begun on Stoke Station) follows Donne's poem so literally it's almost parody, but a delight, nonetheless. Listen to the wind blow-o-o-ow in When icicles hang by the wall (Shakespeare)  Care-charmer sleep (to a poem by 16th century Samuel Daniel) set by Brian while insomniac combines "soporific rocking and discordant  dreams". When Brian sets lesser poets, like his landlord, Christopher Masterman Masterman (not a typo), his stolid approach reflects the poem only too well. The Soul of Steel is melodramatic, the piano part as strident as the vocal declamation.  Get the CD for this song alone. It's delicious, precisely because it's so stubbornly unsophisticated. The essence of Brian's charm.  Stone and Kynoch perform with utter conviction, which makes us respect Brian, all the more. He was an ordinary man who dreamed big. Some of these pieces are good enough to be part of a mixed recital. You could hear a lot worse than Havergal Brian.

Think of the Charles Kingsley (The Water Babies) poem The Lost Doll, included on this genuinely recommended disc.

"I once had a sweet little doll, dears, The prettiest doll in the world; Her cheeks were so red and white, dears, And her hair was so charmingly curled. But I lost my poor little doll, dears, As I played in the heath one day; And I cried for her more than a week, dears, But I never could find where she lay."

" I found my poor little doll, dears, As I played in the heath one day; Folks say she is horriibly changed, dears, For her paint is all washed away, And her arms trodden off by the cows, dears, And her hair not the least bit curled; Yet for old times sakes, she is still, dears, The prettiest doll in the world."
at May 16, 2012